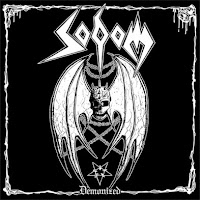 A reprint of Sodom's demos might seem rather useless since so much of their material was recast upon their legendary releases In the Sign of Evil and Obsessed by Cruelty, but I think this is the sort of fan service a lot of their audience will appreciate, especially the leather & spikes Satanic proto-black/death metal sorts who focus heavily on the Germans' formative years and ignore the political punk/thrash era entirely. Plus its availability on a number of formats include vinyl will be an appeal for those who thrive on having the wax versions of every cult recording in creation, and it's been treated with some simplistic cover art that will look flush on your shelves of old Venom, Bathory, Onslaught and so forth.

The material is reprinted faithfully, but there has been a little bit of mastering here to bring out the music's sinister fleshiness and perhaps make it more tolerable to ears weaned on their studio albums for the last 30+ years. I can't promise you that they are all that much more listenable, since the dirty guitars are a little buried beneath the tinny, driving beats, bass throbs, and messy as fuck vocals which remind me just as much of old demo-era Voivod as anything else. In fact, like those Canadians, you can really hear the punk roots in this material, which Sodom would of course revisit more directly in their 90s recordings. However, while I admit that even In the Sign of Evil and Obsessed by Cruelty aren't the greatest studio works out there, and I'm more of a Persecution Mania/Agent Orange guy, I have to say that the album versions are just so much more sinister sounding to my ears than what is represented on these demos. The vocals are so much more 'together' and vicious, while the guitars sound gut-wrenchingly evil despite their primitive tone and construction.

So this really does end up only in the sights of those purists and completists who want the most original recordings they can find of their favorite, veteran 80s bands, of which Tom Angelripper and company certainly qualify. I respect the decision to make this available in as close a 'real' form as the band was comfortable with, only adjusting a little of the mix for modern hardware, so that fans don't have to hear it on the usual bootlegs or just crappy .mp3s uploaded to the web, but I wouldn't even listen to this over the material on The Final Sign of Evil re-recordings they put out back in 2007. It's worth a few True Evil Points to have in your collection but I bet for most folks it just sits there while they listen to "Sodomy and Lust", "Nuclear Winter" and the 1986 version of "Proselytism Real" all over again. Still, this collection is EXACTLY what it set out to be, and you can pick from cassettes, vinyls or CD, whatever poison you prefer, so I'm not about to dump on it all that hard. If you woke up this morning and suddenly found yourself demanding that you own the Sodom demos, or the world would end, then they've got your back.