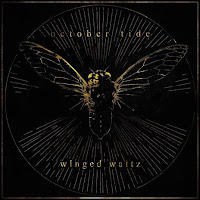 October Tide is a band which has never quite lived up to the catchy, melancholic immediacy of its debut Rain Without End. Not for lack of trying, as they've never released an album that I would consider 'bad' whatsoever. At worst, they've recorded some mildly disappointing, but still solid and professional iterations on their melodic death/doom sound, which just don't resonate quite like it did in the 90s. At the same time though, they've been developing that same sound, and since coming back together last decade have proven more productive than ever, even if it it hasn't thrust them into quite the same spotlight as peers like Katatonia, Swallow the Sun and Insomnium. This is a band that has long remained loyal to its heavily saturated atmosphere of sadness, and to that extent I'd say they've put together another reliable record which should satisfy fans of the last two.

Winged Waltz is, as expected, a slight gradation on their style, well written and patient throughout, capable of creating emotional weight, although it's not as dense as some of the material they've put out in the past. The compositions here almost feel lighter than before, still espousing the melodies and harmonies that define their overcast atmosphere, but letting the heaviness shine through more from the listener's response than by dumping massive gutturals over your head and Brave Murder Day style walls of melodic chords. Fear not, there are still growls aplenty, in fact that's the default for the record, but the guitars thread along through more dynamic ideas, from darker muted picking sequences to rain-glazed, open sky melodies. It's important to note that they put some effort into their heavier rhythm guitar patterns, so they never feel generic, and allow the bass lines to crawl along on their own at some points, the guitars entirely vanishing or pausing just to let a simple, sad melody ring out over the low end grooves, as they do in the depths of "Reckless Abandon". The drums are likewise good, they might not require much energy or aggression, but there are little details in the fills which constantly keep them interesting in a style which doesn't generally demand much of them.

The cover art is a little dull, I'll admit, but all the more reason that I was pleasantly surprised as I listened through this, because I think it's superior to its predecessor Tunnel of No Light. If you've spent hours immersing yourselves into the depths of albums by mid-era Opeth, late 90s Katatonia, Novembers Doom, Daylight Dies, Draconian, Swallow the Sun, or In Mourning, then this is a record which will rekindle memories of wandering, sorrowful creativity, interspersed with a little bit of heavier prog-edged death metal groove. There were few moments among it's 50 or so where I felt like I wasn't being drawn directly into the gravitation of the band's collective depression, and there are lots of catchy riffs here that rang out to me long after the tears dried. Good lyrics, really great production if you're a fan of polish and clarity, I think this one's been somewhat overlooked and is arguably their second best recording to its day.