Varathron - The Confessional of the Black Penitents EP (2015) 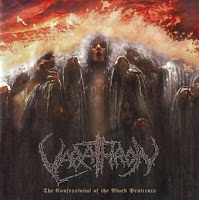 As loved as Varathron's first two albums are in the Greek black metal canon, it was the band's decades-long transformation into the atmospheric, epic, dynamic juggernaut Untrodden Corridors of Hades which proved my favorite of their releases, and still quite loyal to the sound they helped develop on their national scene. So needless to say I was quite looking forward to the follow-up, and The Confessional of the Black Penitents EP isn't quite that in its scope, I was at least satisfied to hear that they were largely going to continue the sound from that underrated gem the year before. There isn't a ton of new material to pore over, even though it's 40 minutes of material, but the two 7+ minute new metal tracks are more than satisfactory and could have easily been tacked onto the end of the prior album and contributed even further to its greatness, with only minor tweaks in production.

Heavily varied, constantly interesting, majestic Hellenic black metal, with many know is performed out in a slower fashion than their Scandinavian counterparts, though Varathron can bust out a blast at any second they desire and maintain the same quality. It's all about the mystique, the representation of ancient Gods, temples, and the occult, cultivating nostalgia for fallen times while simultaneously resurrecting it forward to future generations. Grand melodies play out against thundering currents of drumming while a humble rasp leads it all like a tour guide through a violent midnight bacchanal. You can always tell that this crew is putting constant effort into how to piece together their tracks, and I can't imagine any diehard for the classic sounds of Rotting Christ and Varathron not falling for "Sinister Recollection" and "Utter Blackness" upon first listen, they are so well composed and such a dependable manifestation of that scene's cult sound. As for the titular intro piece, it's just some strumming strings with a few rasps above them that let you know the feast is about to begin, and I don't know that it stands on its own quite as much without what is to follow.

Now, if the EP were just this new material I'd rank it accordingly alongside the previous album, but the remaining tracks are from a live gig in Larisa, Greece...and they also sound pretty damn good. The mix is quite clean, permitting you access to the intricacies of the picking, the bass and drums and vocal slather without anything wresting dominance away from the rest. The material is also very level sounding even where it's drawn from such a big spread of their career. "Unholy Funeral", off His Majesty at the Swamp, sounds just as impressively potent as "Kabbalistic Invocation of Solomon" off the last record, and everything fits in so well to the performance, from the choirs and dark ambient back-scapes to the metallic core of the band. The result is that this whole damn EP is worth hearing and owning. You won't find the studio tunes or live cuts elsewhere, everything is quality checked and if you've been into any of their stuff ever (sans the lukewarm Crowsreign) then they've got you well covered.