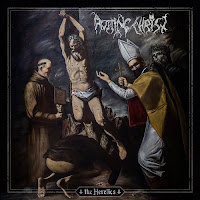 While it feels like forever since I've really been digging on a new Rotting Christ record, it hasn't actually been all that long. I had been slightly underwhelmed by the last two, Κατά τον δαίμονα εαυτού and Rituals, but neither of them was actually 'bad', they just didn't further the bands' expansive Hellenic sound the way I knew they'd be capable of, and they seemed like a downturn after the very good Aealo back in 2010. After listening through this latest effort, The Heretics, I found some commonality with a lot of their albums that I've enjoyed since pioneering that highly melodic, choppy style of Thy Mighty Contract and Triarchy of the Lost Lovers. The overall tone and production is more in line with the last few, and there are points at which it still feels like a choir-driven affair, but a lot of those catchy if predictable riffing patterns have returned, and I was into it for the most part.

Whereas earlier albums in the prime of this band focused very heavily on the guitars to create the action, offset by the Takis bark, this one features so many different vocals floating about its neo-classical narrative that sometimes the guitar melodies have to settle for the background. So a lot of the orchestrated influence is still present here, but they do their best to render it all down to that simple, heavy metal riffing which has long made bands of this scene more distinct from the blast oriented, chord-streaming black metal acts of Northern Europe. There aren't a lot of guitars that stand out quite as much as their later 90s fare, but they manage to make the tunes soar emotionally and really leave the impressions of these ancient religious clusterfucks that shaped faiths, nations and peoples. The album has a very thick, bombastic atmosphere thanks to the thundering beats and the simple depth of the rhythm guitars, plus the mournful timbre in most of the vocals. There are a number of riffing passages here which are just borderline doom, and each tune tends to take its time with just a few basic ideas and not become too cluttered...

Which helps when you're involving the choirs, the varied vocal styles, and other atmospheric embellishments, since the album feels more genuinely realistic, a solemn mantra of antiquity channeled through electric guitars, percussions and growls. Granted, this album sometimes has a lot more in common with Batushka or Therion than A Dead Poem or Sleep of the Angels, but if this is the direction Rotting Christ is determined to explore forevermore, then at least I can appreciate that they're pacing themselves to offer the listener some real gravitas, some sadness, some stakes to the topics they explore. The lyrics here are a mixture of quotations from authors and philosophers, and then very simple repeated lines of imagery that represent the Biblical subjects at hand, which is to say they aren't getting minimal simply out of laziness, but for aesthetics. And that is what The Heretics comes down to, orchestrated drama they've been exploring for the past decade, only this time it has a little heft to it. I was rarely mesmerized by the record's austerity, but it got a couple hooks into me early and kept me listening through a number of cycles.