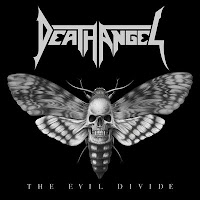 What immediately struck me about The Evil Divide is that it was a more clear return to the direction Death Angel was headed on their Frolic Through the Park and Act III records, back during their prime when they were becoming a household name among the thrash fans at the turn of the decade (1990). It's certainly a more advanced and involved record in terms of composition, and it also has a stronger sense of dynamic range than the album before it (The Dream Calls for Blood). The production isn't nearly so harsh and concrete, it feels 'modern' but not overly so, which I think turned a lot of cult thrash fans off that one a little. Stylistically, it's a bit of the same and then takes a few risks, not to an experimental level of weirdness like Frolic Through the Park, more in just how clinical and technical they can pack their riffing style.

The fact is that this lineup really gels here, and the rhythm guitars are fucking intense and like the album before it, just flooring you with the sheer number of riff patterns that are strewn about the 45 minutes. Probably a higher count than any other Death Angel disc, or most thrash records for that matter. The bass tone is nice and fat and given some air to breathe in a few tunes. The leads are quite good and superior to the previous album, and unlike a lot of peers that are spewing out modern thrash records after 30+ year careers, The Evil Divide seems capable of putting in some genuine emotion without getting to cheesy, as on the riffy, memorable "Lost" where Mark lets his cleaner, more sustained vocals and harmonies reign. On a lot of the material, he actually gets a little more grit to his voice than on The Dream Calls for Blood, although that album might have felt heavier in sum because of its more abrasive, crunchy guitar tone. I find the instrumentation just in general seems as if its more practiced and effortless, but also more inventive and melodically imbued to stick to the listener's brains long after the death's head moth has fluttered away. Speaking of that, it was a little strange that they dropped the horn-crowned wolves which they had been using on the two albums prior and then also on the follow-up to this.

Death Angel got a lot of good buzz off this one, and for an understandable reason. Re-evaluating my own feelings on it, and getting back into it, I feel like it's even better than its predecessor, although there was a time when I might have told you differently. Mature, intelligently written, about as far from the run of the mill pizza thrash that these guys and their Californian peers inspired throughout the early '00s as you can get. The Evil Divide is still a catchier album when I'm listening to it than when I'm not, but that said I do keep a couple of its hooks stored in the grey matter when I'm thinking about the band on the whole. Had this album come out in about 1992, even with a slightly less professional production, I think it would have been the stuff of legend and blown peoples' heads off, it certainly eviscerates The Art of Dying and Killing Season, to me the nadir of their career, those early 'comeback' albums that didn't wholly justify the return. At any rate, folks looking for detailed, dynamic thrash metal which isn't afraid to stretch its wings out will very likely appreciate this one.