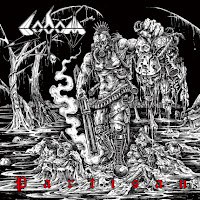 Although they were never my fave of the German Big Three thrash acts throughout the 80s, 90s or 00s, if you had me compare all those veterans' latest efforts, Sodom's Decision Day would narrowly edge out Kreator's Gods of Violence as my favorite. It was a dynamic, professional piece of thrash metal which played up to all of the band's strengths over their career without sounding in the slightest bit jaded or ready to hang up the axes. As a band known to dump a few EPs onto the market to keep themselves active on fan radars and perhaps get a test sampling of whatever new material they are working on, Partisan was perhaps inevitable after they had put out the Sacred Warpath primer on Decision Day back in 2014. So I assume that at least the title track here will appear on their next full-length releasing somewhere around the 2019-2020 period.

The EP features three songs, two of which are new to this release, and the last a live recording. The mix on this material sounds fantastic, with the vicious and bright guitars, sturdy bass tones, peppy and punishing drums, and most importantly, Tom sounding as nasty as ever, with a nice sustain and distance to the production of his vocals, even if the lines themselves aren't that exciting matched up with the rhythm guitars. Now, "Partisan" itself is a fairly average, mid-paced thrasher for the group, with riffing structures that sound familiar, as if they were patched together from other Sodom tunes, but the studio quality definitely lifts it up a notch, and it has a few nice lead guitar details in there and a general hellishness which maintains the momentum they achieved on their 2016 full-length. It's the sort of tune that would sound pretty much at home on Agent Orange minus the production difference.
"Conflagration" is the other n00b here, a slightly more punk-fueled cut which didn't really hook me until the more atmospheric vocals leading into the bridge, and then a nice neck-jerking pure 80s mosh riff breaks out and you kind of forgive the earlier blandness.

The live tune, "Tired & Red", actually sounds pretty fantastic, from the 2018 Rock Hard fest. I really love how the vocals sound, they're a little loud compared to the guitars, but very menacing with the effects, Tom sounds as seasoned as ever. It might not be enough to add a lot of value to this EP's existence, especially if "Partisan" and "Conflagration" end up on a more substantial album, but at least what is presented here is presented well, and that goes for the entire release. The songs don't hook me like "Sacred Warpath", "Blood Lions" and "Caligula", but certainly they show there is plenty of oomph left in the Germans' arsenal, and I've got no reason not to remain excited for what they come out with next, although the long-term value of this EP, sans the great black & white cover art from Roberto Toderico, is anyone's guess.