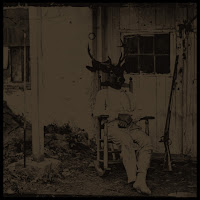 Vowels' first proper full-length release sees a combination of their 2011 EP Hooves, Leaves & the Death with another mini-album in As December Nightingales, all totaling 5 tracks and about 33 minutes of content. The Italians were previously unknown to me, but they've certainly got an aesthetic about their music which involves much of the post-metal or shoegaze elements that are currently explored by a number of other bands with roots in the black metal sphere. While I wasn't able to make a huge personal connection to the writing here, there's no argument that the quartet knows how to elicit a great deal of atmosphere through their composition, and even where the EPs reach their least memorable moments, there are still situations in which they would serve as appreciable background noise.

As usual, this is a bit of a 'deconstruction' of black metal elements into a landscape of flowing, swelling sounds and sparse percussion that relies just as heavily on what is NOT there as what actually plays out across the disc. The Hooves EP is where most of the metallic ingredients are involved, especially "Wolves Eating the Sun" through which dissonant tremolo distortion is threaded like some ghastly approximation of the dramatic wastelands that so characterized early to mid period Sonic Youth. The drumming is often reserved to lower, tribal toms slathered in a din of crashing cymbals, and the vocals range from decrepit, drawn out throat groans/whispers to a more massive, almost operatic timbre that opens up in the bridge of "Wolves..."

Several of the other tracks here take on an atmospheric, experimental folk vibe like the dreary "At Night" in which a lower voice hovers over strings and a numbing background synth when all manner of natural percussion sounds escalate into the arrival of a solid beat. The dreamy closer "Wake" follows a similar path, but the drums are engaged immediately, a bass line swerving and captivating beneath the drift of ambient strings and guest female vocals which serve as more of an ebbing, flowing phonetic muse than something complex or lyrical. I actually found that these two tunes, in particular were wholly mesmerizing and left more of an impression on me than the heavier material, so I can only imagine how effective a full-length in this style might be. That said, the one other piece included from As December Nightingales, the piano driven "Vespri" was not quite to my liking, despite the arrival of the vocals and the ensuing, brief psychedelic breakout jam around 2:00 deep.

Ultimately, I felt that as a sum 'album' experience, this was somewhat inconsistent in its ability to grasp my ear, from the more epically structured, 12 minute "Wolves..." with loads of guitars to the dreamier cuts that lead us out of the experience like a minimalist hybrid of The Decemberists' darker and more folksy introspective breaks and Godspeed You! Black Emperor. I do enjoy the band's internal variation, and how they approach their sounds as more of an obscure soundscape than a pop fixture, but it took a bit long in getting there. As painters of aural imagery, however, I think there's a lot of potential here if Vowels can arrive at just the right balance of brushes and canvas.