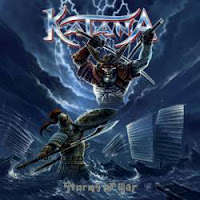 It's hard to approach Katana as anything more than another spoke on the trendy wheels of traditional speed, power, and NWOBHM worship that have entered the race recently. But to their credit, they do a pretty good job in exploring the nostalgic aesthetics that shaped them. Heads Will Roll was a decent debut, if not exemplary, and the Swedes seek to capitalize on that with a more matured sophomore. I enjoy that this band strives for such an honest tone to their music. Nowhere on this record does it feel like they're over polished to a fault, but performing their craft as a quintet well versed in the roots and attempting to develop some strong songs and hooks. Storms of War is unfortunately not the catchiest of records I've heard in this field (Enforcer's sophomore Diamonds is still the one to beat), but it's a more solid effort than its predecessor.

The best way to describe Katana's sound might be to present them as a mix of Hammerfall's earlier work (when they were actually good) or Riot's 90s output with the German speed/power of the 80s and the the architecture of NWOBHM masters Iron Maiden. This last comparison is felt heavily in a track like "Khubilai Khan" with its airy, melodic setup and driving triplets, the intro to "Wrath of the Emerald Witch", "No Surrender", "The Wisdom of Edmonds Field", etc. Meanwhile, the similarities to an album like Glory to the Brave come through the spry melodic chord-streams present in "Reaper" or "The Samurai Returns". They're capable of a good dynamic spread here, pacing out the album so the faster and mid-paced cuts are balanced out, and most importantly, there are ZERO shitty power ballads on the album. Guitars are quite intricate, with a nice crisp tone that exerts just the right level of distortion to feel 80s, and the leads are well formed if not incredibly sticky in the brain.

Johan Bernspång turns in another pro performance here, tending towards his soaring mid to high range pitch, but still capable of a scream or two (the end of "Reaper"). The rhythm section is also pretty tight, the drums set perfectly into the mix and the bass lines of Susanna Salminen borne of the plodding grooves and muscle that Steve Harris exemplified through the late 70s and 80s. There's a lot happening through the 50 minutes of material, and you can tell the band invested a lot of effort into writing songs. At the end of the day, though, I'm not sure the hooks here grant this the same immortality as many of the classics that influenced it. Vocal and guitar patterns do often feel familiar, if not entirely derivative of their sources, and the choruses just don't stand out despite the obvious talents of all the members.

Storms of War is a step above Heads Will Roll in terms of craftsmanship. It's competent, consistent, never boring, worthwhile if you're into the retro stylings of similar bands, and the studio engineering is a great fit. But unlike Number of the Beast, Port Royal or other greats of the Golden decade, I don't imagine I'll be giving it more than the occasional revisit.