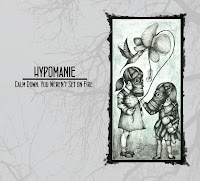 If you had asked me some few years ago if I could ever stomach a 45 minute instrumental blackgaze album, I can't promise that I would have answered in the affirmative. However, Hypomanie's third full-length effort Calm Down, You Weren't Set On Fire had me in its throes before even the first track subsided. That this is a Dutch solo project, all instruments performed by a single individual known by the abbreviation 'S.' (for Selwin), is nothing short of impressive, but more compelling by far is the album's ability to overcome the due predictability of its components to become this desperate, beautiful and hypnotic tapestry of guitars and drums that feels as if An Autumn for Crippled Children had jammed out with Explosions in the Sky.

I've no past memory of the previous Hypomanie records Sehnsucht or A City in Mono, but it seems that the project has followed a similar course to many in its niche: firm, raw black metal roots that evolved into a more accessible, melodic medium without sacrificing the appreciably lo fi atmosphere we often equate with the underground legends. In fact, beyond the production values, it would be quite difficult to classify any of this album as 'black metal'. Usually there is a layering of guitars with some gorgeous, keening melodic line being joined by a less evocative, more heavily saturated rhythm track. Great examples would be "19 Stars and the Sweet Smell of Cinnamon" or "If Only the Seas Were Merciful", but the technique is used everywhere as S. alternates it with cleaner calms redolent of shimmery 90s alt-rock or shoegaze music like The Cure, Lush or the Cocteau Twins (quite heavily showcased in "Alissa Loves Perfume" and "Lullabye for Ian") The percussion is also a treat, with simple beats ranging from the driving desperation of emotional torment to a more playful temperance.

If there were any complaints, I think they'd be the usual suspects involving excess repetition in some of the guitar lines, and perhaps a lack of variation that bounces back and forth between only two climes. Certain songs here like "You Never Listened to the Birds" are even more raw and grating than others, but they still thrive off the same wailing impetus. The riff progressions are often quite easy to predict in advance, so rarely does this spin off into the unexpected, and yet they're still pretty immortal. I was not put off by the 8-10 minute length of most of the songs, nor the lack of vocals, and that speaks volumes of the ability to grab the listener by the ears within the first few measures and then draw he or she into it for the distance. Calm Down... has its limitations, and not everyone will be invested in its jubilant emotional outbursts, but those seeking a chic aural backdrop against which to ponder the happy and sad shifts of their lives could find far worse foci.