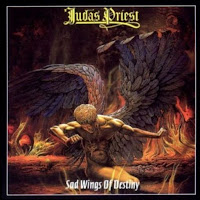 Like skilled snipers sharpening in on their marks, it wouldn't take Judas Priest long to fire their fatal bullet. Sad Wings of Destiny might not be a complete digression from the groundwork they had laid with Rocka Rolla, but it's a far more focused record which puts to rest some of the indecision I felt on the debut. Where Rocka Rolla was teeming with the psychedelic rock and heavy blues influences of other British heroes, Priest refined their songwriting here to really strike out on their own, and one could argue that this was the 'birth' of the band we all know and love today, at least in the sense that tracing this point A to any later point B is a smoother course. This is still an admittedly '70s' sound, with some moody, almost tripped out moments strewn through the metallic surges, but I'll be damned if this isn't one of the better records of its type in the whole of the decade that fashion forgot.

The second and last record for the Gull imprint, whom they'd have a few issues with down the road (with the Hero, Hero reprint compilation the band shunned in '81), Sad Wings of Destiny would be heavily responsible for getting Priest signed to CBS, the major label on which they'd explode in the ensuing decade. It's not difficult to reason why, when you hear this thing. For one, the guitars and chorus hooks are far more determined and memorable, on nearly every track. I'm not incredibly enamored of the atmospheric ballad "Dreamer Deceiver", or the Queen-like piano/vocal piece "Epitaph", but just about every other song is gold. The riffs still tug upon the influences of Zeppelin, Cream, Sabbath and Thin Lizzy, but they've fashioned the chord sequences into progressions so powerful in places here that they rival any of their forebears, and there is a distinct increase in the use of 'chugged' guitar lines that flow rather well in the context of the bluesy, wailing leads and the incessant charisma of Rob Halford's piercing timbre.

Though it wasn't my first experience with Priest (that would a Christmas Gift of their first live album Unleashed in the East from '79), this was the first studio album that I ever experienced from the band, probably around 1980-81, and even as a child I remember thinking just how powerful and creative the songs were. "The Ripper" is in particular an ambitious piece for its perfect use of momentum, the vocals and chugging setting up the rhythm section and a wicked sense for melody that felt like you were in some creepy, haunted mansion. Fuck, I wouldn't be surprised if the entire blueprint for the Castlevania games' VGM was based on the one riff in this song, though it also reminds me of Satori from another 70s group, Japan's Sabbath inspired Flower Travellin' Band. There's even some experimentation tucked into this piece, through the trills and wailing noises in the bridge.

Another monstrous number here is the opener "Victim of Changes", a song that likely needs no introduction to anyone who has been following the genre for any decent length of time. Massive, striking and unforgettable bluesy grooves drive the narrative of Halford's multi-pronged assault, and this is one of the points where they get really psychedelic in the bridge, with a simple guitar repeated over smooth, subtle bass and great vocals. "Genocide" has this incredibly, leaden and smoky barroom feel to the guitar lines in the verse, and the chugged guitar lines in "Deceiver" felt nice and relatively complex for their day. "Tyrant" also breaks balls with its heavy as fuck power chords, plunking bass and the nice contrast of the softer 'tyrant' in the chorus with the louder counter-lines. Halford also does a lot of self-harmonizing here (and through the rest of the record), which works astoundingly well, because really, the only thing better than having one Rob is two Robs. (I know what you're thinking, perverts. Stop it.)

Not every song is a hit, but even where Sad Wings... does falter, it's not remotely frustrating or bad. I just felt that "Epitaph" might have been better served elsewhere. Halford sounds great with Glenn Tipton's pianos, as he does with almost anything, but it feels slightly too dramatic, and I like my Priest with the kick ass guitars and cloud piercing harpy vocals. "Dreamer Deceiver" is slightly better because the guy's voice is brilliant, but despite that and the strong bass lines of Ian Hill, I just felt I was waiting for some big, catchy riff that never happened. Another song I often teeter over is the finale "Island of Domination", but thankfully it's got this really interesting structure where the rhythm collapses down in the middle and that one, evil riff sequence around 2:00. You also get a taste for Halford's lower, swaggering 'soul' vocals here which feel to me like the guy could've cut a record for Motown.

Not surprisingly, Priest had a new drummer here (their 5th), Alan Moore, replacing John Hinch, but I didn't notice a major difference in the playing of the two, only that the aggression of the music had been ramped up so it feels more structured and marginally less 'jammy'. As for the production, it's comparable to the debut if slightly more 'aged' when I listen to it today. You can still make out all the nuance, expression and instrumentation as clear as day, but there are a few points where the rhythm guitars feel more muddled than others. Ultimately, though, while this is perhaps not an absolute favorite of mine when rubbed up against certain other gems in the Brits' lexicon (Sin After Sin, Defenders of the Faith, Painkiller and a few others have always seemed somewhat more consistent for me), it's a damn fine record worth anyone's time and money, so any holdouts might want to pony up and revoke their poseur licenses.