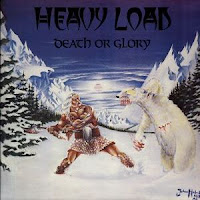 When you've got a Viking warrior and a fucking polar bear throwing down on your album cover, then you'd damned well better be ready to throw down the gauntlet yourselves and get into the fight. While I can't claim that Death or Glory is a much heavier evolution of this Swedish band's sound than the Metal Conquest EP, it brings back a lot of the dramatic dynamics that defined their 1978 debut album and fuses them into some of the band's best songwriting. In fact, if I had to choose a single Heavy Load record to recommend that best represented their sound, this would be my first selection, a strong balance of pure 80s thunder and epic arrangements that might have competed in the same arena as Battle Hymns or Metal on Metal, if not for the limited accessibility the Swedes suffered from having to release the music themselves. Even today this is quite a rarity, and one is almost as likely to find the Japanese licensed copies as an original vinyl.

Death or Glory actually dials down a fraction of the single minded masculinity of the Metal Conquest EP in terms of its sheer sound, and as a result the guitar tones here have more of a fragility to them which really helps sell the blustering leads and the dual melodies (as you hear through a track like "Might for Right"). In general, though, the musicianship here is simply a more interesting experience than anything the band had brought out to date. The vocals shift back to a bit of the crazier charisma found on Full Speed at High Level, only with a lot more restraint and refinement which manages never to seem as sloppy or disjointed. The drums and bass on this record still sound great today, and for the first time in Heavy Load's careers, the leads really soar through cuts like "Might for Right", "Bleeding Streets" or the flashier segments in the bridge "Still There is Time", which have this raw classical formality to them which explodes into a sequence in which the noodling winds down into this pure, exotic chugging and flexing.

The Swedes retained a bit of their theatrical edge with the use of melodic, layered backing vocals and song structures that play out almost like tributes to the Sagas. In particular, "Daybreak Ecstasy" is a notable piece for its 9 minutes of escalation, from wintry acoustics and choirs to Styrbjörn's brief war drum thumping into some of the most glorious, imagination carving dual melodies on any Heavy Load release. This thing is simply PACKED with excellent riffing and pacing, and the vocals really howl out across the wintry background created through the reverb and atmosphere of the guitars. Hot damn, when they hit that tremolo riff around the 3:00 mark you just wanna find your own ursus maritimus and spill its savage blood across the snows. The track "Trespasser" is another unsung classic here, with more of those choppy, mean melodic guitar chugs that would have been huge if they were on Kill 'Em All (though the chorus here is admittedly a fraction too loud), and a few psychotic effects that give it almost this Hawkwind meets Diamond Head sci-fi feel that jives well with the apocalyptic lyrics.

Seriously, if Heavy Load had released an album full of tracks like that, with a little more control to the vocal lines, they likely would have blown up across Europe. But then, the variation present on Death or Glory is far from a weakness, and at least 6-7 of its songs rank among the best of their entire canon. Even the lyrics here are in general quite thoughtful, if not complex (like how they manage to create a jubilant transcendence out of what is essentially a metal groupie tribute in "Heavy Metal Angels"). The production of the record isn't perfect, with the voices clearly too voluminous in spots, but the tight rhythm section and the airy atmosphere of the guitars still sounds fresh to my ears 30 years later. I might be a little biased in its favor, as this was the first Heavy Load record I was ever exposed to (several years after it came out), but all of its many facets combine into what is very much mandatory for fans of this era. It was no Restless and Wild or Screaming for Vengeance in terms of 'hit potential', but holds up favorably along the output of acts the world over like Anvil, Loudness and Riot.