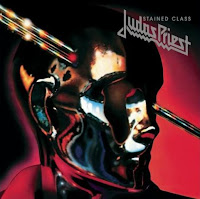 Stained Class was the third masterful album in the 1976-1984 'hot streak' of what is indisputably one of England's most exciting bands of the period. Excluding Point of Entry, each of the individual records the band released was overflowing with songwriting envied the world over, and though there were clear 'hits' among the batch, even here, it's the sort of experience you can still sit through today, 30+ years later and enjoy from beginning to end with painfully few hurdles between them. The cover is iconic, rather artsy for its day and age (even compared to the three previous albums) and for some reason always reminds me of wacky sci-fi pinball machines. And I LOVE wacky sci-fi pinball machines, so you know where this is going...

It's often considered to have a 'cleaner' production than its predecessors, a point which I don't exactly debate, but frankly I thought albums like Rocka Rolla and Sad Wings of Destiny sounded great, so all I really heard was that it felt like a more developed set of songs. Rob Halford was starting to grow more and more into his screams, the strut of Ian Hill's bass was a sound anchor to the generally higher pitched guitar line, the bluesy and reined in distortion of the rhythm guitars was very clear while retaining a full body, and Les Binks' steady and polished pounding was pretty intense for the time, if not incredibly adventurous. This album actually had quite a number of moments where the band returned to some of the groovy rocking of the debut, with the Led Zeppelin/Cream feel of the licks, but even here they strike it rich by executing an unflinching sense for catchiness and an atmosphere and aesthetic that places it in the arcades, roller rinks and high schools of the late 70s. In fact, while it might seem a strange observation, I think this was a pretty cool record even for disenfranchised disco fanatics to find shelter in.

There is just so much you could say about "Exciter" alone, but it's only the first track on the album. Rob's chorus has the ability to burn itself straight into your memory, and the shuffling pace of the rhythm guitars in the verse provides one of the more memorable. Lots of little nuances here, like the 'bow to your knees...' break which Venom would later adapt rhythmically into one of their own famous lines. Or the epic transition of the bridge (around 2:00) where they transform it into a near rock opera with the layered harmony. Or the dual melodies deeper in the track which spawned a million impersonators in power metal with their classical rhythmic configuration. The leads are great, not a lick wasted, and it's simply one of the best fucking songs this band has ever written, fairly advanced and progressive when paired up against even the better songs off Sin After Sin or Sad Wings...

Fortunately, the album has a far deeper roster. No one is warming the bench this time out, whether he or she prefers the searing wails over the driving hard blues of "White Heat, Red Hot", the iron grooves and shrill seasonings of "Saints in Hell" which feels like a track Sabbath might have written and passed off to Priest since they know the Birmingham gods could do it much better. The panning of those chords in the bridge is so testosterone inducing epic that you could probably plug in a car battery and some Dr. Emmett Brown pseudo-science and transport yourself back to any major conflict in history. "Savage" makes you want to beat back smilodons with a giant mammoth-bone maul, and then of course you've got "Beyond the Realms of Death" with its glimmering acoustic intro and driving mid-paced metal eruption that I often use as a meter to determine who can or can not be my friend. They also pull out another of their classy covers here with a version of Spooky Tooth's "Better By You, Better Than Me" (from the previous decade) which is so bad ass sexy that members of the opposite (or sometimes, the same) gender will immediately begin gyrating and stripping.

I haven't yet mentioned "Invaders", or "Heroes End", each of which could serve as an alternate energy source for Western civilization once the petrol wells run dry. Stained Class is so saturated in greatness that it almost begins to feel claustrophobic, and there isn't a song written for this which can't turn back the dials of time to a point at which the emerging metal genre felt so fresh, inventive, and lethal. The leads blaze with a bluesy abandon into your subconscious, and Rob's sharp-edged pitch is not something he refrains from using to its fullest here. How many power, trad or speed metal singers do you hear lately that have even a minute fraction of this guy's immediate distinction? Brilliant, slicing harmonies everywhere. The lyrics here also reached a new plateau of restless imagery and relevance, proving that the infant extremity of this genre had the potential for a literary, not pedestrian message. Frankly, I would not have thought it possible that Sin After Sin could be trumped in such a short span of time, but for Judas Priest that took only about a year. Perhaps not a 100% flawless record, there may be a note or two that I scoff at or a riff that sinks below the rest, but nonetheless an essential, timeless experience which is mandatory for anyone who dares call him/herself 'metal'.