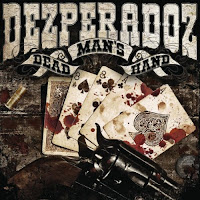 I had pretty high hopes for the Dezperadoz project after hearing the 2000 debut The Dawn of Dying, because let's face it: Wild West themed metal is in short supply, and the thought of a German speed/thrash band taking up the idea and applying Tom Angelripper's vocals is quite inspirational. However, since that point Alex Kraft's project has taken a turn for the worse, upping the atmospherics and Western/cowboy cliches and pairing it with a modern pop production and a more melodic vocal edge that often reminds me of The Cult's Ian Astbury crossbred with Alice in Chain's Layne Staley. There are still distinctly heavy/power metal riffs in there, often with a bit of thrash or groove to them, but it just wasn't enough to justify all the cheese toppings.

Sadly, Dead Man's Hand does not take a 180 back to the roots of the outfit, so this is more or less a direct continuation of An Eye for An Eye, but I'll give Kraft some credit. He's a talented dude. His vocals cut a little more into the skin here, and in general the riffs are kept pretty heavy, a more hostile spin on the bluesy/grooves you'd hear from Zakk Wylde and company. Maybe The Cult or Skid Row if they were more 'metal'. They're often pretty threadbare and generic in nature, but back in the early 90s, where hard rock was one of the styles being subsumed into grunge or groove metal, an album like Dead Man's Hand likely would have found an audience. The production is high end, the use of pianos and acoustics and other instruments give it a massive, dynamic feel, and for the most part they seem to lay off the lame narrative interludes and other bits (they still exist, though). On the other hand, this is all so very cliche and song titles like "Just Like Cowboyzz" and "Yippie Ya Yeah" make it hard to take seriously. I realize the Dezperadoz are a bit of a fun gimmick, but not a 'funny' one.

If only this level of energy was applied to something more devout and vicious, Kraft would have one of the most unique bands out there. Instead of the silly stereotypes, go for broke with some greater concept and more complex, interesting music. You could still use the folksy guitars, the pianos, the theme, but how about steering it in more of an Unforgiven or Deadwood direction and less Blazing Saddles? Ditch the big melodic rock songs like "Train of Souls" and bring back some of that thrashing from the first album, because often this album feels about as Western as Bon Jovi's "Blaze of Glory" or "Wanted Dead or Alive" and no further. A lot of the lighter hearted throwback tracks like "My Ol' Rebel Heart' just plain suck, and there's no reason to swell up an album to an hour of content when you could just as well cut it down by 20 minutes and keep the more interesting, original sounding compositions.

These criticisms aside, though, I do feel that Dead Man's Hand is marginally better than the two albums before it, and if anyone out there was truly enamored with style established on The Legend and the Truth, then they might as well strap on the six shooters and run and gun with this. Aside from some of the goofiness, there was some effort in its construction, and Alex is a good singer if not a memorable one. But alas, the prize cow of Wild Western extreme metal has yet to be properly milked and butchered.