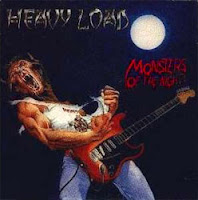 Stronger Than Evil was for all purposes the swan song for Sweden's Heavy Load, but they did manage to squeak out one more single with two new tracks before splitting up in 1985. Perhaps not the 'banner year' in the 80s for werewolves (that would be 1981), but you had the first Howling film sequel, the Michael J. Fox vehicle Teen Wolf and then of course Monsters of the Night, with its tee shredding hesher howling in tune to the full moon. Is there an amp connected to that thing? I'm not gonna lie to you, next to vikings, polar bears and corpses this is pretty goddamn weak, and unfortunately the music is also some of the worst the band had written, despite boasting largely the same lineup as the previous two albums.

"Monsters of the Night" is another horror party track, with an opening not unlike that of the title cut from Stronger Than Evil. Unlike "Thriller", or Tankard's "Zombie Attack", this one seems to think it can get by on having almost no interesting riff patterns and a bunch of cheesy effects of wolves howling, creeking doors, decrepit grunts, 80s hard rock synthesizers and a fuck ton of shout along vocals that too often drown out the significance of the lead singer. But really this is about as close as the Swedes every got to bland mainstream rock radio and it's a complete waste of time. The other piece, "I'm Alive" sounds like the bastard child of Black Sabbath's "Neon Knights" and Golden Earring's "Radar Love", perhaps too much so. Uplifting heavy/ power metal, sure, but once more we're dealing with a derivative and weak guitar progression and vocals that are hardly as inspiring as what we experienced on Death or Glory and Stronger Than Evil.

The real tragedy is that this was put out as a 7" through the Warner group, so Heavy Load was possibly on the brink of breaking into the bigger market at last, but for whatever reason, label pressure or just a personal choice, they decided to move in a more banal and mass audience friendly direction not unlike Quiet Riot, or other bands who walked the margin between hard rock and heavier metal, but the results would prove mediocre at best, miserable at worst, and not a fond farewell from a band so capable of greater. To their credit, they probably realized this themselves.