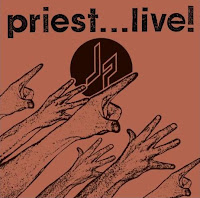 Priest...Live! might lack the personality and controversy surrounding the first Judas Priest live effort Unleashed in the East, but it compensates by providing a natural update to the band's canon in that it doesn't seek to retread the use of the 70s material in the set list. So, for the fan of the band's 80s period, this was the 'modern' Priest, and since they had been pursuing a new style for their latest studio outing Turbo, it makes a whole lotta sense, really. Would that they had stuck to this policy of recording only newer material for subsequent offerings of this sort, one per decade, I'd have a savage respect for the squad, but due to the change in singers and the long gaps in their recorded output through the ensuing decades, that would not turn out to be the case.

So the tracks chosen for this set were once again culled from numerous dates performed in June '86 at The Omni in Atlanta, Georgia and the Reunion Arena in Dallas, Texas. Having seen the band a few times here in the States, I can vouch for their collective professionalism and explosive sets across the aeons, but what I enjoyed the most about this offering was simply that I got to hear a number of tunes in the set that I don't normally or would never again normally expect on any of their big tours. Namely because it incorporates a bunch of the Turbo material. "Out in the Cold", "Rock You All Around the World", "Private Property", "Parental Guidance" and of course "Turbo Lover". That last one is admittedly a fixture at many of their gigs, but to hear the others from such a divisive record (which I happen to enjoy) is pretty sweet. I'm not sure of the validity of using "Out in the Cold" as the opener, it feels mildly lethargic (as it does on the studio incarnation) and doesn't exactly build up the listener's excitement, but for all I know they didn't actually do the songs in anything near this order at the actual dates. Otherwise, the material sounds pretty smooth. The synthesizer elements aren't as wild as they were on Turbo, Rob's voice is well sharpened and right on the money, and the guitar chords sound robust without leeching from the rest of the band.

Of course, this was also the first opportunity for me to have a live album with some of my favorites from their earlier 80s material, some of which numbered among my favorites of that period. Obviously the huge hits like "Breaking the Law", "You've Got Another Thing Comin'", "Heading Out to the Highway" and "Living After Midnight" were included in the set, after all these were the ones loading up their bank accounts, but I was also pretty excited for versions of "The Hellion/Electric Eye", "Freewheel Burning", "Metal Gods" and "The Sentinel", all of which sound pretty clean here, though occasionally too clean that they come of so polished that some of the natural, inherent aggression seems leeched. I feel like this is due to the mass levels of reverb and expansive sound that were likely needed to fill these arenas, but they still sound pretty close to their studio counterparts, although a few of the lead sequences are altered. The crowd response sounds a lot more genuine than Unleashed in the East, and Rob's voice a little broader and less piercing, and then there's the fact that this is simply more substantial of an offering at well over 70 minutes and nearly twice the set.

Priest...Live! doesn't carry that same nostalgic value I had for the first album, and some of the songs seem a little too tidy and restrained, but I'll take this any day over the Ripper-led live albums the band would produce many years later, and it's nice that the band decided not to rehash the material from Unleashed in the East, as if to let it all stand on its own as a documentation of the band's evolution. Or, they were likely just tired of those songs by the mid-80s. Ultimately, though, this is worth a pick up only to those who are not turned off by the heavy presence of Turbo. In recent years I've been starting to fancy live albums that feel more focused and authentic (from a single gig), but looking back at the past favorites this was almost never the case. Priest...Live! is certainly not a favorite from this period, but it does its job enough to satisfy an ear attuned to Screaming With Vengeance, British Steel, Defenders of the Faith, Turbo, etc.