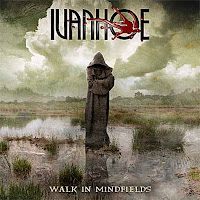 If Walk in Mindfields proved to be somewhat less memorable an experience than its predecessor Polarized, I think it could largely have been written off due to the conditions of its arrival. After Andy B. Franck left the band in the later 90s to work with newer projects Symphorce and Brainstorm, the band more or less dissolved as a productive force. By the time they took a deal with Massacre to put out their fourth album, most of the lineup had been replaced. The heart and soul of the group, bassist Giovanni Soulas remained, as well as guitarist Achim Welsch, but aside from a few contributions from the earlier drummer Lars Hörnig, it was time for fresh blood in the form of Lanfear keyboardist Richard Seibel, drummer Sebastian Brauchle and, perhaps most importantly, vocalist Mischa Mang.

While this album largely follows in the footsteps of its predecessors, there were some notable changes in terms of how they delivered the music. The guitars for one feel far more groove leaden. Denser and richer in tone than they already were with Polarized, so there's this natural incline towards a heavier low end supported by the ruddier bass sound Soulas is punching in. The keys still play a huge role, supporting the rhythm section where necessity dictates but never afraid to break out on their own, and in truth this approach seems the perfect throne on which Mischa's smoother voice can sit. If asked to choose a favorite between Mang's style and Andy B. Franck, it would prove difficult, because while the latter had far better chorus parts on Polarized, he also had a voice that I could more clearly trace to its influences. Mischa feels fresh and inventive by comparison: fully capable of delivering a higher pitch or scream, but quite confident with his mid range and never even bordering on the overkill that I occasionally felt on the first two records.

Walk in Mindfields is admittedly quite tight, but few of the tracks here really knock me over with the same emotional force as "Souls of Fire" or "Whipping the Flies". Songs like "Bless My Soul" or the title track seem more moody and atmospheric, with Mang's voice in the former hitting a Geoff Tate-like escalation at its chorus that is arguably the catchiest single moment on the whole of the record. The guitars and keys are actually a little busier than the past, Seibel and Welsch incredibly fluid when playing in tandem, but for all the riffs and grooves there just aren't many that stand out on their own. Granted, that's never been a forte for the band. The guitarists have traditionally stuck with lower end chugs that support the airiness of the organs and synths and the dominant vocalist, but since Mang's vocals are not always so memorable here, I found my attention turning towards the remainder of the cast and not being rewarded for it.

As a result, much of the disc has become a blur for me, especially the latter half. Surely this is a competent, cohesive work which flows seamlessly between tracks, but I can't claim that it quite builds upon the momentum of the past, or evolves Ivanhoe's sound in a productive way. That said, it's certainly got the most beautiful cover art in the band's catalog, and considering that it showed up after an eight year gap, the Germans pull enough tricks out of their hat to make for a pleasant, if ultimately banal record. Stronger than Symbols of Time, but nothing extraordinary when paired up against the dominant progressive/power metal albums of the mid Oughts like Angra's Temple of Shadows or Pagan's Mind's Enigmatic Calling which cremate this before the funeral director even gives the signal. Fear not, though, because this same lineup would return in full force for the subsequent, and notably superior Lifeline.