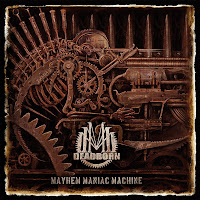 I don't remember a whole lot about this German group's 2007 debut Stigma Eternal, only that it was death metal with a slightly surgical and technical alternative to the more prevalent melodic death style coursing throughout Europe in the wake of acts like At the Gates and Darkane. Mayhem Maniac Machine certainly enforces this aesthetic, a brutal record of a different sort than what is naturally acclimated towards through the modern USDM scene or those Euro bands that have eschewed the Swedish old school worship to glide along an axis of more clinical, calculated savagery. I hear a fraction of mid-era Carcass here circa Necroticism, slathered in the crushing, clean concussions of Necrophagist, with a not intangible sense of post-thrash/death riffing that reminds me of Slaughter of the Soul had it been performed with far more technical revelry and dowsed in guttural gut wrench vocals.

The drummer on this thing, Slavek Foltyn (who himself had a brief stint in Necrophagist), is such a mechanical monstrosity that, were a face and history not applied to his persona, I would simply not think of as being of the same human species that I belong to. Incredibly precise, muscular blasting helps define the contours of the choppy, thrash-like riffing that the band explodes through on each track; to the point that you could almost turn off the rest of the group and still be amused by the sheer level of percussive destruction. That said, the riffs themselves explore quite a wide array of dynamic intensity, from the methodic, cold octave sequences to the more dissonant pummeling generally associated with the most brutal bands in the field, only Deadborn maintains such a prim polish to the tone that they never overburden or interfere with the louder aspects of the drumming and the unfortunately monotonous, but huge vocals that punch you in the face from their forward position with a decidely Immolation-like sense of intonation.

If I could ascribe any one flaw to this record, it would simply be that the mechanical, forceful execution of its content fails to ever manifest any hinging on an atmosphere. Deadborn wants you to know that its constituents can play, and good fuck can they play their brains out, but I feel that the exertion here is born more of a weight training room than an inherent sense of evil I so worship in my favorite death metal. These guys are more like the schoolyard thugs beating you on the schoolground than the silent, diabolic conspirators who desire your extinction, and as a result it felt more like an exercise than an artistic expression. Then again, this is not an invalid approach to the form, especially one so athletic as Mayhem Maniac Machine, and considering the level of carnage generated through the band's calisthenic musical ability, I feel that what they've generated here on the sophomore is at the very least head spinning and entertainingly violent enough that tech death fans might appreciate the muscular clockwork of "Second Order Cybernetics" or the frenzied fisticuffs of "Slaves of Megatron".

Posted by autothrall at 6:38 AM