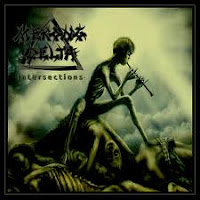 By this point, a number of the better known German thrash acts have released compilations of re-recorded classics, for better or worse. Perhaps the most effective of these has been Destruction's brazen Thrash Anthems collection, with which they modernized an array of favorites into the context of current production standards, but numerous others like Tankard have been less successful. Here in 2012, Steamhammer Records will be releasing two more of these efforts, from mainstays Holy Moses and progressive thrash heroes Mekong Delta, the latter of which has been on a role with their new lineup and recent albums. As usual, I approach this sort of release with some trepidation. While glossier, louder and more accessible, I feel that the re-recordings can tend to rob some sense of perspective from the newer audience who haven't experienced them in their original format, and there's often a sense of 'rubbing out the past', even if the band are just out for a little fun...

But just as often, bands will look back on their past works as flawed and have a genuine desire to see them rehashed in a more digestible format. It's difficult to tell with Intersections, because while these are being executed through an almost entirely new lineup than the early versions (aside from bassist Ralf Hubert), they really don't take a lot of liberties with the material. For instance, vocalist Martin LeMar, while remaining distinct from the band's prior screamers, seeks to honor their craftsmanship closely enough that his timbre doesn't quite distinguish itself. If anything, he's got marginally less of the sporadic character and insanity that his predecessors once asserted over this music. The guitars sound a lot richer due to the advantages of modern studio polish, and the rhythm section truly shines through with some resilient, powerful tones coming out of Hubert's low end, but even though the album might seem a 'friendlier' way to bait a younger audience into their sound, I must admit that in nearly every case, I prefer their older incarnations.

That said, this isn't a bad selection, and if it drags a lot of new fans onto Mekong's radar of influence, then who am I to complain? Gods know, this band fucking deserves some attention over the hordes of also-rans and wannabes that seem to dominate the sub-genre's scene in recent years. The material chosen here spans their 1987-1994 era, the first six full-lengths, which is honestly surprising. I would have thought they'd stick to the first two or three, and then leave the door open for another volume, but then again they could always just mix and match as many of these collections as they desire from the entire backlog. Kaleidoscope (1992) seems the most favored with "Heartbeat", "Sphere Eclipse" and "Innocent?", while most of the others only have one or two proxies. Internally, the balanced mix of the instruments flows very well across the 10 tracks, equalized to the point that they almost feel as if they always belonged together.

Standouts would be "Heartbeat", "The Cure" and "Shades of Doom", the latter for the great and angry counter-vocals, but I fail to see how anyone new to the group would find the entire playlist less than enticing, even if some of my favorite songs in their discography have been omitted (especially from Principle of Doubt and The Music of Erich Zann). Ultimately, the fresh coat of paint and polish will hold some appeal for prog metallers and cerebral thrashers who have very little familiarity with Mekong Delta or the other tech German thrash of the 80s. If you've picked up Lurking Fear and Wanderer on the Edge of Time and feel no compulsion to do the legwork or dirty work in tracking down all the older CDs, tapes or vinyl, then have at it. I can't see myself desiring to experience this over the constituent original albums, but for what it's worth they've done an acceptable, competent job. A fresh coat of paint, but I wouldn't say that the songs sound all that 'fresh', beyond the tones of the bass, the choppier guitars and the muscular drumming. A newer, unreleased track or two would have rounded it out better.