Begrime Exemious - Visions of the Scourge (2012) 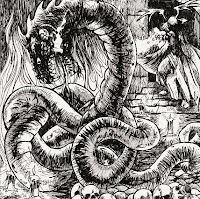 Alberta's filthiest band, Begrime Exemious have been gradually improving themselves across the course of their discography. The 2010 full-length debut Impending Funeral of Man was a steady incline over the Set Ablaze... EP the year before, and now Visions of the Scourge surpasses even that, in what must be the group's most virile, venomous and focused effort to date. The striking black and white cover art is their best yet, looking as if it came straight from the pages of some obscure role playing guide like the original AD&D Monster Manual from 1977, and it's a nice portent to the absolute, twisted and sincere extremity saturating the music.

Perhaps one of the band's obvious strengths is how they are able to capture a very raw, live feeling without seeming under-produced. Begrime seems like it could be performing in the rehearsal space next to your own, with this organic tone to the guitars and vocals that feel as if the band seek the most honest representation of their live capabilities when entered into the studio. I found Visions to be mildly less melodic than Impending..., perhaps even a bit slower and less complex, but the writing here is built off a lot of the same influences, crossbred between the realms of formative black and death metal circa the late 80s and early 90s. Certainly you've got the undertow of band's like Hellhammer in the grooves, but I like to think of this sound as what might have happened if Autopsy, Darkthrone and Mayhem were to form a band together in 1989. Black as pitch, brutal without being technical, and weened off a pissed off, punkish subtext (as in the breakout bass-led charge in "Oath of Impiety").

Some of the riffs often feel familiar in structure to many you've heard, but then they take off into these manic, old school evil tremolo twists that soak up the volatile, torn growls like a carpet of human hair absorbing the blood of some nearby stabbing victim. But they're actually quite dynamic, and you'll experience a solid variation through the track list, from the dissonant and ghastly spikes of "Chasm of Obscurity" to the disgusting momentum of "The Vault of Ancient Bone and Poison Saliva" (one of the best song titles this year, easily) and the thundering, thick guitars that meander through the opening to "Sacrament of Virgin Flesh". Where the drums cut away in that song, the grinding of the guitars is beautifully hostile. I also enjoyed the whacked out, sporadic leads that carved an atmosphere into the closer, "Relic of Befouled Incantations".

When you think about it, Canada has always been a haven for these excellent hybrids of the black and death metal niches, to the extent that they really toss all of their components like a salad of rancid guts and then bake them into a dish of their own. Groups like Blasphemy and Revenge paved the way, and today we've got Weapon, Mitochondrion and Begrime Exemious shouldering this hellish burden and battering through the pearly gates, each in their own, inventive way. Begrime might seem the least 'experimental' of this crop, but they also are one of the best at capturing the tangible malevolence of these genres' roots and then smiting the listener upside the face with them, all without the security of unnecessarily polish, symphonic excess or needless wanking indulgence. Visions of the Scourge is their most virulent, wretched embolism yet unto the arteries of humanity, and even if its slightly shy of primal perfection, its pustules absolutely ooze unapologetic evil.
Verdict: Win [8.5/10]