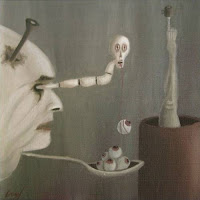 I haven't decided yet whether to believe Martin Lang, longstanding proprietor of Germany's Todesstoß, is a mad genius, or just very far off his rocker. For nearly 20 years now his black metal vehicle has been churning out a large body of demos, splits and albums with not a whole lot of fanfare, and it's plain to hear why: this shit is terrifying. From the surreal, disturbing or just weird cover imagery that graces a lot of his releases, to the hideously primitive nature of the songwriting, this is not a musician driven by the latest, glossiest sort of black metal progression, but instead by contorting new patterns from its elemental ingredients, and not always the same way on each successive recording. Würmer zu weinen, the second proper full-length of the project, is a great example of how he can twist the quirks and flaws of his sound into strengths that haunt the listener far after the audio.

Think of this as slow to mid-paced black metal, entirely driven by a drum machine set to sound more like an industrial backline than a proper metal drummer. The guitars are extremely raw, with a very cheesy saturation to them that sounds a lot like (and probably is) a practice amp, and these are set out into very simple chord patterns, often smothered with a second, dissonant guitar line. At numerous points throughout the album, he'll let the beats and rhythms die down and then just concoct some eerie guitar that plays out in solitude with a nearly hypnotic string of notes. Above all of this is his lunatic, raving vocal style, which seems like little more than some psychopath making a mockery of the form with entirely unfiltered rants and rasps that channel a schizophrenic rainbow of goofy but unsettling personalities. We're all accustomed to the high pitched, painful vocals of luminaries like Varg Vikernes, but Todesstoß is next level, almost like a trolling or deconstruction of depressive black metal in general, with no fucks given. It gets even more bizarre when he'll drop out of the music and just use these as a tortured spoken word all on its own.

Here is an album which is accessible in its simplicity, but almost inaccessible in terms of many fans of this genre taking it seriously. Uncouth, unprofessional, and unconcerned. For all that, though, it's quite artsy and appealing, and if you can stretch your mind and tastes enough to appreciate its eccentricity, it can prove rewarding, although not the most interesting of the albums he's put out. The songs are generally long, between 9-14 minutes here, and while this sort of primeval bedroom black metal could throw that all away by becoming overly repetitive, there are usually some twists or unexpected, fuzzy melodies or synthesized sounds emerging through each landscape which keep it an adventure. An ugly adventure, without a happy ending, but a few passages of gloom and grace that will remind the audience of the roots from which this sprung. Depressive BM with a dash of death rock, industrial beats and maybe late 90s Bethlehem is an apt comparison, but even then I don't feel like that covers it. If you're on the hunt for well-produced, catchy or savage black metal, Todesstoß is one to stay wide of, but if your tastes permit for raw-boned production, genre deformity and plebeian experimentalism then this one might lose you in its minimalist maze.