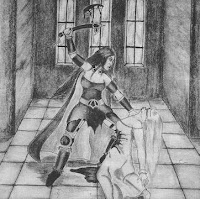 There's a certain level of purity implied by such barbaric and amateur artwork on a black metal record like this. I'd be lying if I said that the cover itself, a raven-haired axe goddess terminating a blonde counterpart in some tiled Dark Age manor or comparable structure, wasn't a big factor in me wanting to check out this obscurity. Long out of print but looking really good on paper. The band name. The album title. The fact that it was released on some little homebrew imprint called Wolfnacht Domain, which might be the coolest label moniker ever if they had ever put out anything beyond this, which to my limited knowledge they did not. Queen of Frost has quite a few cards stacked in its favor before even a note has been played...

And admittedly, I was pleasantly surprised here to find a lo-fi but competent black metal recording that reminded me a bit of fellow Swedes Marduk during their mid-90s period, sans a little of the same capacity for blasting aggression. It's probably the dingy but clear production, and the way they subtly and effortless employ dire melodies alongside the savage outbursts. Then there's also a little bit of a Bathory (or Barathrum) viking pacing to some of the slower, groovier riffs which truly feels like the cover looks. The drums definitely sound like they're being beaten down in a garage, but the kicks create havoc with a continuous rumble that sounds like an avalanche of fist-sized hailstones bouncing off the roof above your head, and when they, in tandem with the guitars, whip up a storm of volatile speed it's hard not to picture a band of yetis barreling down a wintry mountainside on war sleds, spears thrust forward and ready to impale anyone unfortunate to be skiing there that day.

Queen of Frost is a little moody in how it shifts between the faster and slower moments, with just enough dissonance and tremolo picked uncertainty that I didn't find it as predictable as I might a lot of unknowns from the same era. The vocals aren't exactly the most evil sounding, but feel like a guy is having his throat gouged in with ice picks, and the bass lines, while only hovering slightly behind the rhythm guitars, are at least audible enough to make an impact on the album's infrastructure. There are also a few timid synths used in tunes like "Far Beyond the Ravenstar" (what a title). It's probably impossible to find this album without using the internet, but if you pine for these lost moments in the evolution of European black metal, I'd have to say this one is decent enough for a listen. Nothing out of the ordinary, but it has spunk. One of the guys would go on to drum in the band Jotunheim for a couple demos, and apparently there's more material released on an EP more than a decade after this album, but beyond that I'm not even sure of the rosters' longevity or participation in the broader Swedish scene.