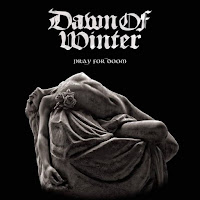 With nearly 30 years under their belt, I don't think anyone can really question the commitment or sincerity of Germany's Dawn of Winter as a 'true doom' metal act. Perhaps not the most prolific of their peers, releasing but one full-length album every decade on the '8th' (and really 9th) year; but there is nothing remotely trendy here on Pray for Doom, just a band that sticks with a classic formula and hones in on the how to deliver that with clarity and potency. This is very clearly doom of the dreary Sabbath mold, where simplicity is effectiveness, yet translated a bit further through the Gothic stylings that Swedish bands like Candlemass or Memory Garden, brewed up from the tears of the 80s and 90s, the same era in which this band itself was also manifest.

That being said, after listening through this album a number of times, I've come away only with a very mundane reaction, because unfortunately Dawn of Winter writes some of the most saccharine, predictable sorts of riffs for the genre. Bolt and loud, perhaps, but so minimalist in their composure that they feel like they're simply paying homage to their own style and not truly hooking in the listener, much less dimming his or her skies with the rolling-in of mournful clouds. You know where each and every riff is going as soon as you hear it, and while occasionally on a metal riff that can be a good thing with a convincing enough, thriving energy, here it's a bit of a drag. They'll often dress it up with a slightly thundering, tribal pattern as in "Woodstock Child", but as you start to finally feel some of that electric, melancholic chill coursing over your being, it flattens out into some pretty pedestrian songwriting that just makes me want to listen to Nightfall again, where it felt fresh. The instruments all sound exactly as they should, perhaps even a little too clean, but here it's really just a matter of not taking any risks on interesting chord progressions, leads or melodies.

It doesn't help that Gerrit P. Mutz' vocals just don't stand out for me in the field. Ironic, since some of his earlier power metal outings with Sacred Steel gave me the opposite reaction: sticking out too much in the wrong way. You're not going to get any of his insane wailing through this material, he reins his pitch in to respectfully match the style of this band, but the voice just lacks the supreme passion and eeriness of the best doom front-men, there is little agony or despair to be wrought from the lines, even though he's a competent craftsman at phrasing them out. Combine that performance with the stolid pacing and production, and the lack of any real surprises once the first few tracks have marched past you like a pair of stone oxen pulling a cart along, and you've got yourself a pretty run of the mill doom experience which never truly plays up to its strengths. Even the lyrics are bland and often feel as if they were culled from a checklist of graveyard emotions and 'doom' imagery. Not bad, inoffensive, perhaps a dependable disc if you're a purist who just wants more of this particular traditional style, but I hardly had my soul crushed listening through it.