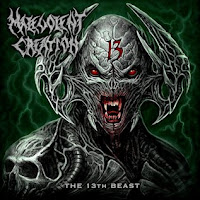 I can only imagine the amount of  hard work Malevolent Creation mainstay and guitarist Phil Fasciana had to put into The 13th Beast to make it manifest. Not only did original growler Brett Hoffman pass away tragically to cancer, but the rest of the lineup had also changed since 2015's well executed effort Dead Man's Path. So as I'm sitting here listening to this record it's a real testament to the Fort Lauderdale band's professionalism and resolve. I say that as one who has always followed the band for their importance as one of the Florida scene's enduring, guttural voices in the death metal medium, but also one that's never been terribly taken with a lot of their material, which falls into the 'passable' zone a lot more than the 'memorable' one. With the exception of the weird Joe Black EP back in 1996, Malevolent Creation has never failed at kicking you firmly in the posterior, even if they don't always do it with sticky, timeless songwriting and dynamic range.

The 13th Beast is a bit more brutal and monotonous than its predecessor, bouncing between their usual bootstrapped blast beatings and roiling Bolt Thrower/Brutality-like mid-tempo material. The footwork is intense as usual, the guitars fast and true to the form, or moodier when they slow down and feel reminiscent of stuff you might hear off an album like The IVth Crusade. Leads warp in and out with ease, often adding some genuine thrill to what can otherwise be a duller rhythm riff set, and the bass and drums sound like they need to for an intense battery such as this. Unfortunately, while there are a good number of riffing progressions flying around, too many of theme seem run of the mill and forgettable when assimilated into Malevolent's body of work as a whole. I mean a tune like "Mandatory Butchery" really goes for the throat, giving the listener the entire range of their style, but even then the guitars feel sort of familiar and unsurprising. The rhythm section performance feels slightly more of a mechanical thing, competent and in lockstep but not adding much personality.

As for the new vocalist/guitarist, South African-born Lee Wollenschlaeger, he's got some pretty huge shoes to fill. While his straight brutal vocal is competent and not unlike Hoffman's, there is likewise a bit less charisma in how he delivers it, with far less variety. Gone are a lot of the shifts between snarls and gutturals, here you just feel like you're being beaten repeatedly with a dull hammer. Not that his predecessor was the most unique in the genre, but these feel as if they could have been replaced by any number of other 90s-style death metal vocalists and there wouldn't be a huge difference; whereas experience had really sharpened Hoffman's delivery. Still, Lee's a competent player and growler, fits right into the mold here and with after settling a bit more into the material, should turn out fine. I'll ultimately liken this record to Cannibal Corpse's Vile, a new album from a heavily entrenched death metal band with a new vocalist, which doesn't quite live up to the material just before it, but is not at all much of a dip from the stuff Malevolent Creation has been consistently churning out for nearly three decades. If you're a big fan of Invidious Dominion or Doomsday X then I don't think you'll be too disappointed with this, but I'm unlikely to return to it much.