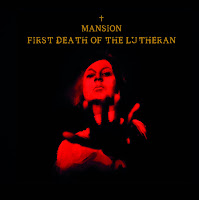 Mansion has its roots deep in Black Sabbath territory, but what it does with those roots, glazing them in a hypnotic cult psychedelia and phenomenal production values, is what makes the difference between a band like this and so many other wanna-bes vying for the throne of the doldrums. First Death of the Lutheran, the Finns' first proper full-length after a number of EPs and splits, is not about to win any awards from how it formulates its bare-boned excuses for doom metal riffs, but rather in just how well-made it is, structured to crescendo into claustrophobic fear with its killer vocalist and the unusual lyrical focus on Kartanoism, a Christian group formed nearly a century ago that was known for its young preachers, stark social dogmas and wild prayer sessions which involved a lot of freaking out, speaking in tongues, you know...the hardcore shit.

In fact, when played at just the right volume, this album mesmerized me into the sort of ritual trance it explores thematically, all with such simple formulae, almost like a contemporary counterpart to Coven's legendary Witchcraft Destroys Minds & Reaps Souls, even if the music is wrought from a darker cloth. Heavy guitars are used more or less as scarce drudges that lurch the momentum of the songs forward, while the bass smothers the undertow in huge grooves. Strings, organs, fuzzy little proto-electronic sounds and ambiance are slathered across the weight of that bass, and the tinny and lush, minimalist percussion that is often left to its own devices once the proper, tribal beats disappear. But the real star of the show is moody, ritualistic intonation of Alma. Simple lines, mid-ranged pitch, and often filtered with slight levels of effects to create that creepy, claustrophobic vibe I hinted at above, a sort of euphoric dread. The male vocals here are decent also, Gothic and downtrodden, especially on the cover of Joy Division's "The Eternal", which works surprisingly well amidst the original material, especially when Alma goes more ethereal.

The production is so perfect that you feel like you could hear a whisker drop amidst the sobering, psychedelic swell of the songwriting, and it would only add to the steady tension. The bass and guitars are perfect volume so as to complement the vocals and effects, and the whole purity of the thing feels like you're having it played for you live at some wooden, remote lodge where you won't normally her another sound for many miles around, apart from the writhing religious exultation. The lyrics are exceedingly simplistic, yet they're an aesthetic match for the primacy powering the music. After checking out a few of their earlier EPs, I wouldn't say the style has evolved all that much, it might rely a little less on riffs and more on the atmosphere surrounding them. At any rate, this is one I'll readily recommend to fans of Jex Thoth, Seremonia, Sabbath Assembly and Blood Ceremony.