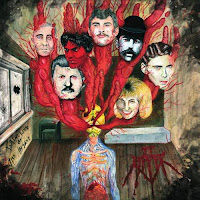 JT Ripper seems at first glance like it's going to be one of those bands in which one of the members is called by the 'JT Ripper' namesake, and then everything else just sort of gravitates around his role in the band. So before even listening to a note of Gathering of the Insane, I already knew this JT Ripper cat was pretty goddamn cool, and that I wanted to hang out with him, at least as long as he could tolerate such an idiot. Looking a little further, that's not the case here, JT Ripper is obviously abbreviated for the serial killer of Whitechapel, and these Germans are just a trio of seasoned thrash metal tyrants by the names of Chris, Daniel and Steffen. However, any such disappointment becomes short-lived when you hear the filthy aggression these gentlemen scalpel out in generous, surgical portions.

They play a variety of hostile thrash/speed which hearkens back to the early nexus of metal extremity which would later splinter off into black, death and pure thrash metal. Bands like Possessed, Venom and earlier Bathory lent a lot of their DNA to the style here, but it happens to be a sub-genre that I never grow tired of, and JT Ripper have enough going on to keep me engaged throughout the whole 36 minute runtime. Frenzied tremolo-picking guitar passages channel their Teutonic forefathers into punishing patterns that fuel the constant momentum of the thundering drums, so if you were looking for your next contemporary fix of Sentence of Death, Endless Pain or Obsessed by Cruelty, it's safe to say they have you covered. The music is consistently intense for that style though, the beats so busy that it almost takes on a near war metal-vibe sans the monotonous, over-saturated riffing you might expect from that style. The bass is loud and pops right along to the guitars once they hit a mid-paced charge as they do in "Feast", while the hoarse, sustained growl vocals and some of the faster riff progressions are firmly entrenched in 80s death metal.

Production on the record is potent but raw, with clarity in the instruments that doesn't seep away from their genuine attempt at sounding like they belong around 30 years in the past. They don't sound quite so nasty in the mix as bands like Deathhammer, Exxxecutioner, or Obnoxious Youth, but I think the choice for a mightier, steadier tone really lends the record some strength, especially when they're at full thrust and some of those higher pitched, evil riffs break out. Though the band does occasionally dial down the tempo a bit, the vast majority of the material here is aimed at the higher speeds of the German originators, and I think this is one area in which JT Ripper could work on integrating a few more head-banging, mid-paced riff sequences that would really supplement the replay value of the whole package, but that's a little bit of nitpicking, as Gathering of the Insane is an album that worked for me right away, an entertaining sophomore that I'd gladly recommend to fans of any other band I've name-dropped above, or perhaps a Toxic Holocaust, Baphomet's Blood, Cruel Force, Desaster, or their I Hate label mates like Antichrist, Dreadful Fate, and Deathstorm.