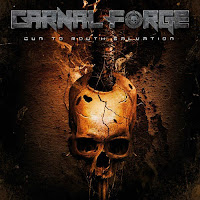 Always competent, if not always memorable, Carnal Forge struck when the irons were hot in the late 90s, playing a brand of death and thrash that easily fit in with the melodeath outbreak of that era, and managing to land some decent record deals and exposure in the process. Alas, they were inevitably lost in the shuffle, and by the time their least known, 'last', and in my humble opinion best album, Testify for My Victims came along, they already seemed to have become a footnote in the Swedish crop of bands which produced touring juggernauts like In Flames, Soilwork, Dark Tranquillity, and their ilk. They've had a couple single releases in the interim, but since that previous, underrated album had just proven such a riff rich environment, I'm not actually all that surprised that they have returned 12 years later, firing on most (if not all) cylinders.

Carnal Forge hearkens back to that age old tradition of keeping the heavy 'thrash' element of their songwriting so entrenched in tense, exciting guitar progressions, and it really shows, since it is by far the guitars which are the most engaging and impressive components of Gun to Mouth Salvation. With patterns that recall anything from the Teutonic and West Coast US thrash scenes of the 80s, to the Danish veterans Artillery, to melodic death pioneers At the Gates and Carcass, I'm always finding something to admire in just about every track on this record. Perhaps not always a strikingly unique riff, and occasionally erring on the side of cheesy groove-like rhythms, but there is such a punchy and genuine energy being packed into every tune that it's infectious. The rhythm section is more than capable of giving the guitars the right level of thrust, but apart form matching the excitement factor they don't exactly stand out against the choppier, melodically-engraved thrashing. The whole force of the band is absolutely loyal to that modern, clinical, industrial strength sort of death/thrash...don't expect raw production, lot of reverb, or other charming hallmarks of the Golden Age; this is firmly planted in the 21st century as most of their albums have been...

...whether that's a positive or negative, that sort of punchy, contemporary production and style, is really up to the listener's preferences. If you're a fan of The Haunted, Darkane, and so forth then I think these guys remain firmly in that camp. However, one aspect of Gun to Mouth Salvation I was not totally sold on was the new vocalist Tommie Wahlberg. He has a 'carnal', mealy-mouthed style which, while not inherently bad or lacking in personality, seems a little too rough-edged for the actual production of the instruments. It almost sounds like they were recorded separately with different ideas in mind. Take that other famous Tomas with the -berg suffix in his name, and approach that style of raving and barking with a more gut-felt, almost splattered timbre, but unfortunately not in a positive way. That said, if you enjoy the more eccentric, harsh lines spat out by frontmen like Lindberg or Friden, I don't think this guy will really get in the way of your enjoyment, and the music is just so solid, from the switch between neck jerking speed, mid-paced atmospheric rhythms and the ability to deliver a good old, epic Swedish melo-death style chorus. This one isn't quite as strong for me as Testify for My Victims, but the riffs are very good, and I like it more than any of the albums that came out before 2007. Their hiatus has certainly not rusted them whatsoever.