Basilisk - A Joyless March Through the Cold-Lands (2004) 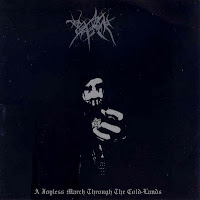 If ever an album title was destined to be a mission statement for the music contained within, this would be it. A Joyless March Through the Cold-Lands...the modus operandi of just about every one-man basement or bedroom act in the universe. Right? Hell, the 'one-man' in question here even dubs himself Vintyr. Okay, I'm exaggerating, and to that effect, I'm afraid to say that this album does not, in fact, feel very wintry at all. This isn't black metal for the forest or fjord, for the howling of wolves or the feel of your blood being frozen in your veins as you wander through the hibernal nightscapes bearing just a cloak, corpse paint, spikes and a replica sword you ordered online from your favorite fantasy film. This is actually a dimmer, danker, personal style of black metal which revels in its rawness and the negative emotions conjured through its composition and production choices.

Basilisk takes timid, programmed beats and echoing, spacious melodic guitar lines and then slathers them in some of the most impish, distorted, sick snarls and rasps you were likely to hear back in the mid-oughts. And despite how primitive and unprofessional it all seems, I have to admit that once in a while this stuff gets pretty alluring. There is barely any variation within the framework of a particular track, although between the different tunes the distortion and riffing style will occasional change it up with different levels of saturation. All roiling in the primacy of the form, but slicing the listener's ears up in a few different frequencies. The riffs themselves are extremely basic, occasionally cutting out for strangely atonal melodies or harmonies like in "The Force Inside the Opposites", before they shift back into mid-paced chord carvings. At the record's most vicious extremities, like "Bitter", Basilisk is definitely channeling some of its ancestors...A Blaze in the Northern Sky, Deathcrush, Under the Sign of the Black Mark or the first few Burzum efforts, but in some ways it can become even more simple and clearly the product of just the single demented mind letting all his guts spill out through the amps and microphone.

Now, I'm sure there is a large percentage of the black metal audience, which focuses highly on the musical proficiency and intensity of the drumming and guitars, which will now and forever feel that an album like A Joyless March Through the Cold-Lands sucks, but I rather appreciate that uncouth nature of the music...that personal exhibition of suffering that you hear a lot in these one-man acts. It's nothing exemplary or particularly memorable, but I tune in to albums like this because I want to feel like I'm walking along the edge of some abyss, and Basilisk, for all its flaws in audio and musical chops, certainly grants me that. I don't know that this one is quite melancholic enough for the pure depressive BM crowd either, but if you just want razor-raw riffing, atrocious vocals that splatter nightmare-stuff all over your lobes, and just enough of a rhythmic skeleton to propel its pitch black imagery forward, this is an obscurity you might wanna spend some time with. Plus it's also named after a cool mythological creature, for extra points.