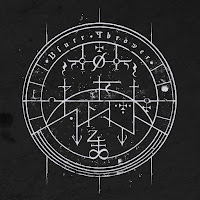 When your first release is a two-track EP with songs clocking in at 19 and 17 minutes, respectively, you've got to have something there to entice the listener's commitment. Fortunately, while they do rely a lot on repetition to fill much of that space, Île-de-France's latest enigma Blurr Thrower has just enough of a hypnotic shadow cast through its atmospheric black metal that I was in fact addicted by about the 8-9 minute mark of "Par-Delà les Aubes", the first of these two cuts. Even more fortunate, that immersion actually paid off throughout the remainder of the recording. That's not to say the concept and riff sequences here prove unique or highly nuanced by any means, but the adherence to just those basic building blocks of melancholic black metal in their hands proves enough of an escape that I looked forward to repeated exposure to these sad, soul-tearing evocations.

Book-ended with great ambient passages, "Par-Delà les Aubes" really hooks the listener with its baleful blend of slightly distorted guitar notes and lightly swelling background feedback that are soon joined by a blast beat and other, tinny, noisy guitars and harsh, raving vocals which seem to exist at a nexus between traditional 90s atmospheric black and the more recent waves of 'blackgaze', without falling too far into either of those directions; at least not until later in the song when some really mesmeric sheens of melodic guitars pour across the listener like cold water after a nap in some dank, echoing, lonely dungeon. The second piece, "Silences", doesn't highly differentiate itself from its predecessor, even playing out around the same length, but there is just a fraction of dissonance to its intensity that keeps me glued to it. Bass passages throb ever so sparsely beneath the lattice of haunted guitar-work, and while the beats aren't all that exciting, their cold, repetitious feel certainly is a boon to the overall effect being attempted through the music.

Another positive here is that occasionally, you'll hear something emerge off in the distance or the recording, perhaps just a phantom your mind is tricking you into believing is really there, that gives the tracks a little more depth than you might have expected. Even periods where the beats disappear and you're just left with this somber wall of heavily distorted, mildly melodic picking seem greater than the sum of what's happening, and the album revels in its dreariness, never freeing you from its clutches, except perhaps the ambient finale of the first track which is subtle and beautiful. Les avatars du vide does suffer slightly from a dearth of variation, but considering it's an EP I'm more than willing to forgive that, especially since it might distract one from its very point. That said, should Blurr Thrower proceed to put out some more substantial full-length releases, a bit more dynamic range will be essential to capturing the audience's attention span. But this is for sure an effective start that makes good on such a limited set of sounds, and Les Acteurs de l'Ombre Productions continues to excel at signing and promoting such atmospheric countrymen.