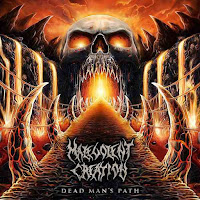 Dead Man's Path is likely to go down as a fond remembrance as the last Malevolent Creation record fronted by the band's late growler adept Brett Hoffman, but it should also go down as being one of their better offerings, reaching far into the past for the pummeling death thrash of The Ten Commandments, but also taking a few chances on something a little outside their typical wheelhouse. In full disclosure, while this a band I've long respected since their inception on the burgeoning Florida scene decades past, they've never quite been a favorite. I largely consider the 1991 debut to be their best, but then again they've put out a pretty long string of albums that turn out 'decently' if not really inspiring beyond the violent moshing primacy that they espouse.

Dead Man's Path is that and a fraction more. You're still getting the same, machine gun battery driven blend of roiling blasts and breakdowns, smothered in Hoffman's sustained snarls and growls, but I find something mildly more atmospheric than their norm. Perhaps this is anchored by the opening title track, a slow, doomed build which uses strange narrated vocals which almost sound like the guy has some sort of strange accent...ascending into these atonal, but memorable guitar harmonies. But it's also through the confidence and certainty with which they execute the heavier shit through the rest of the proceedings. Few if any of these riffs are of the variety you've never heard before, and they're just as predictable as you might believe, but the production and balance of speed and groove here are very well managed, and it remains pretty exciting throughout. Tracks like "Corporate Weaponry" are able to develop strong lead guitars, melodies in the verse and chorus riffing as well as a nihilistic, warlike atmosphere somewhere between Bolt Thrower and their own Warkult.

Hoffman effortlessly shifts between a number of different harsh vocal timbres, without ever coming off as too overbearing or jarring in their transitions. It sounds exactly like a bunch of psychos having a board meeting over the apocalypse should sound, and he dials it back often to let those guitars breathe their necrotic tremolo picked nightmares. The bass has just the right level of bombast and swerve to it to carry the rhythms, and Justin DiPinto puts on an almost untouchable performance behind the kit, one that would probably still be fun to listen to if you muted the other instruments. It's almost a pinnacle of Malevolent Creation professionalism, an exhibition of their better qualities across a quarter century of writing, recording and touring. Don't get me wrong, this album is still pit ready enough to sate the barbaric lusts of the hardcore and 2nd tier death metal fanatics looking for a fight, but as the closure to such a massive chapter of the band's history, it's worthwhile, and their best material in at least the decade leading up to it.