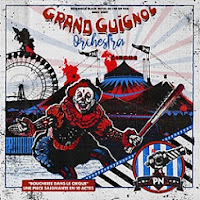 Frenchmen Pensées Nocturnes have long been thinking beyond the bounds of traditional black metal, but their latest, 6th album Grand Guignol Orchestra trades in a bit of the Romantic flourish of prior efforts for a more intense, abrasive experience which certainly rises up to the packaging displayed before you. Yes, this is essentially a circus-like black metal record, digging up a middle ground between Peste Noire and Mr. Bungle, and every bit as disturbing as that idea implies. The freakish cover clowns and the excellent graphic design put together between the band and Les Acteurs de L'ombre is an excellent vehicle for the themes explored, and I feel as if the album is far more committed to this warped, canvased sound than prior effort like Arcturus' Las Masquerade Infernale.

Now, to be clear, this is not an album I heavily enjoyed, but rather one I appreciated for its aesthetic aspirations. This is truly calamitous, unapologetic black metal that has been thoroughly kneaded with horns and other instrumentation that casts a mid-20th century, back alley carnival shadow...a place that would allure you with its glowing lights and euphoric festivities, but not one you'd want to bring your kids to for fear they would be devoured by its attractions. Trumpets, bass lines, organs, various levels of distorted guitars, tuba tones, all manner of whirring and whizzing percussion and a vocal range that is cast through morbid rasps and howls, and cleaner, boisterous tones much like a circus caller or a ringleader attempting to stir up his audience. There is so much flying at you through these tracks that they can become a whirling labyrinth of confusion, a magic mirror-house of torture. And it takes a particular level of skill to arrange all this, to be able to successfully supplant the traditional instrumentation of this metal niche so evenly with the other instruments, above a constant rhythmic battery that is very impressive with the strutting, grooving bass guitars and drum kit.

No, there is no lack of effort herein, and in general I very much dug the carnival parts like the thumping segues in "Comptine à boire" or the frightening freakshow nostalgia evinced through the opening crawl of "Triste sade", but when it comes to the metal content, it almost loses itself to the rest of the experience. Which is sort of the point, I'll grant you, but it wouldn't have hurt to have a few really catchy guitar lines vomited forth that could compete with the great horns and the unwavering, schizophrenic vocal performance. Occasionally the album becomes just too calamitous and 'extreme', like a Naked City record on a post-black, spazzcore bender, and while the intensity is cool, I wish the music itself stuck to the memory a little more. However, Grand Guignol Orchestra is such a damn cool, visionary sort of album, so conceptually successful that I'd be remiss not to recommend it highly to those seeking something on the outside, a bevy of childhood nightmares given flesh through an abusive, murderous adult musical palette. Something wicked this way fucking comes, with a painted smile and a bloody, spiked bludgeon. A ticket could be your last.