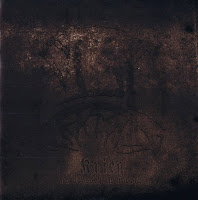 Krieg: An Odyssey in Misery brings absolutely nothing new to the butcher's block, but it's an album fairly well made in particular for a niche of Norwegian black metal fans who might want little more than to return to the days of yore and think entirely inside the box. Essentially an amalgamation of the earlier works of Satyricon, Mayhem, Darkthrone and Immortal, the duo that performs much of this record does so with sinister precision, and a genuine loyalty to their countrymen and influences; but apart from a few moments of atmosphere and nostalgia that elevate the experience above the din of average songwriting, it's black-metal-by-numbers that can often seem as featureless and indistinct as its unfortunate choice for cover artwork.

The full-length Eld debut spends an even amount of time between predictable blasted sequences, mid paced pounders (like "Delxot", one of the catchier tracks), and a slightly slower caste of rhythms that often accrue a little more atmosphere due to the faint hints of melody they incorporate. The vocals are dirty and savage, but don't develop a lot of character to themselves if you're already familiar with a Satyr or Nocturno Culto. They often do double up the vocals to include a cleaner tone, which I found interesting, but the practice is scarce enough that it's never a true feature of the record. The beats are brick-solid and fast as hell when needed, but in terms of fills or good grooving drums behind the slower parts of the album they don't quite stand out. Despite that, it's the rhythm guitars that for me were the weak point...saturated in nasty enough distortion, and pure enough that they could compare to other acts from the early 90s, but almost always what you've heard before and can be celebrated for no other reason beyond that.

To be fair, the two musicians S. Winter and Laeturnus are each handling multiple duties here, with a couple guests contributing other guitars, pianos or keys (including Ivar Bjørnson of Enslaved on the track "Rebirth"). But compared to another duo like Fenriz and Nocturno Culto, there is very little of nuance to how they put together their songs. The organs, the scant clean vocals, a sample, and little touches like a techno pulse ("Rebirth"), or the more spacious raw guitars used i the outro, are really the only times this one deviates from the standard, and while that's honestly enough that I'd consider Krieg a 'well-rounded' record, there are just too few inspiring or memorable measures here that I'd ever grab it from the overstuffed line-up of Norse black metal albums available to me. I don't want to sell Eld too short...they are competent, and if you're just in the mood for an inoffensive, Satanic slab of convention, you could do worse, but they drop enough hints here that they're capable of superior mood and structure that I'd prefer to wait until they expand those concepts outwards.