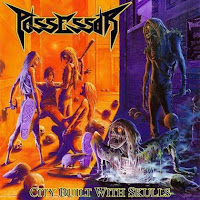 If beauty were really only skin deep, then I'd want to slip a ring on the finger of this full-length Possessor debut. The artwork is more or less a re-thrashers dream. Undead heshers, some with spiked shoulder guards, others topless, emerging from the sewers and alleys of some decadent urban sprawl, the streets practically paved with skulls, while rats scurry about. In the near distance, an emo guy is getting choked out by two of these ghouls before he gets beaten on with an axe and a spiked bat...or maybe a fucking flail! To top all that off, there's a concert bill stuck to the wall just off to the right side of the cover which looks like it is implied that in this strange reality, Possessor themselves would be headlining over the 'Big Four' of US thrash metal.

Like a good 75% of the other pizza bandwagon thrash stuff that has come along in the last decade, I fully expected that I'd hate the garden variety Exodus, Slayer and Anthrax riffs I would find on the album itself, and in retrospect that was probably a little pessimistic. While I can't deny that these Virginians are in fact influence by a lot of the usual suspects in both the thrash and crossover scenes of the 80s, they actually bite into a nasty, fast-paced style that more often than not hits some degree of paydirt. Nothing about the album is overproduced...the rhythm section is pretty much on par with the mix of the rhythm guitar, which is punchy and saturated without being too raw or polished. The bass guitars pump along while the drums have a lot of rumbling fills, I'm not saying every detail sounds super clear but I kind of like the vicious honesty of how it all sounds, it almost sounds like how a recording would feel during the early 90s when thrash was giving up its ghost to other styles, but bands were coming along with slightly more modernized, 'personal' productions.

The real thrill here is the vocalist, Robbie Rainey, who has a ton of charisma as he cycles through the higher pitched, brief screams, the more extended operatic sustains and then the more aggressive mid range stuff he's barking out. He approaches it from a power/thrash vector. It might seem a weighty comparison, but he kinds of reminds me of a mix of Michael Coons (Lääz Rockit), David Wayne (Metal Church, Reverend), Tony Portaro (Whiplash) and Nasty Ronnie (Nasty Savage). He's quite entertaining, even when he's raving over some of the less interesting riffs on the record, and to be honest...there are quite a few. They always possess a sporadic energy to them that is appreciable, but very few progressions that will actually stick out to you once the dust clears. A reasonable balance of faster parts and then some moshier, mid-speed sections that don't feel too excessively dumb or cheap. The leads are fitting to the style although they often lack anything memorable about them apart from the usual bleeding spontaneity they create over the bridge rhythms. The lyrics aren't all that great but I've read far lazier from this generation of thrash acts, and while City Built With Skulls is not the sort of disc you're going to spin over the actual classics, it's definitely more fun than I thought it would be.