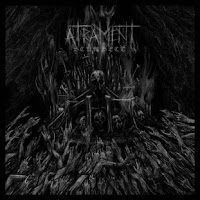 A lot of the bands performing in the crust/D-beat medium these days all carry a particularly Swedish tone to their guitars, often injecting a little dissonant post-hardcore personality, but sticking quite closely to that scene in terms of production values and how the flow of the riffs hit you over the head. Scum Sect was a little refreshing for me in how it handled this approach with a little more ugliness and vitriol. Sure, you're going to hear those punk rhythms that get traced right back to the Discharge lineage, fueling this procession of punishment; but these Californians wrap that up in an envelope of black and death metal aesthetics and even toss in some dissonant, Voivod-like riffing sequences which manage to keep the material atmospheric and interesting.

The backbone of D-beat riffs here also does a lot to trump your expectations...sure a number of the chord patterns will seem familiar at first, but they often veer into an unexpected note selection or get interspersed with tremolo picked death metal fills. It's still accessible and fulfilling enough for those who adhere to more typical acts in the style, but there's just enough gloom and obliqueness to offer a more sinister depth. The vocals are also a little beyond the pale, where normally you get the raving political hardcore barking, here is a rather sustained blackened death inflection which sounds like this shadow hovering over the instruments, with just a enough effects-driven finesse that it doesn't come across as dull or cheap. A broad guttural which often trails off into a bloodier rasp. The bass is a pretty thick, bombastic presence alongside the rhythm guitars which fattens them up rather than trying to stick its nose out elsewhere, and this works well enough here although it wouldn't kill them to drift off on their own for a few bars. The drums have the perky reliability usually associated with this style, nothing too complex but he'll toss a lot of timely, thundering fills to keep the pulse.

I do like that they often break out into the tremolo picked sections, that instantly adds a lot more of a replay value to the usually chord-centered style, and I feel Atrament usually gets enough variation to cover what they're crafting into a typically 2-3 minute track. I also liked the use of a breakout mid paced thrash riff s in "War Seed", just these smaller little dynamics go a long way to keeping the album from getting too samey...and it does on occasion, don't get me wrong, but even then you'll have a few subtle highlights to help you map out one track from the next. Pitch black, driving, menacing stuff here, instantly standing out from the flock of bands that approach this more from the hardcore perspective, which is sometimes pretty damn awesome, but others too predictable. I don't know that Scum Sect is quite the peak for this band, there's plenty of direction to grow into, broadening their higher pitched picking and atmosphere, but it exceeded the baseline expectations.