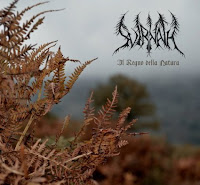 "Natura", the intro piece to Il regno della natura, is so quaint and inspiring that I almost felt bad for whatever Svirnath was going to hit us with afterwards. A lush, concise escalation of clean guitars, atmospheric synths and tinny electric melodies, it immediately casts the listener into the vast outdoorscapes that this one-man Italian act will be exploring through its black metal. Thankfully, for the most part the rest of the record evokes that same of wonder, but in doing so it has to make a few concessions that might turn off some of the potential listeners who might otherwise really enjoy this. I even found myself distracted by 1-2 of the elements as I found the rest of the effort quite excellent.

To paint this project in broader strokes, it dwells within that same, airy realm that groups like Horn, Summoning, Eldamar and Fen have made their abode. Granted, those are quite varied acts in of themselves, and Svirnath doesn't sound too close to any of them, but certainly the aspiration is the same: to cut its black metal into expansive, glorious swaths of expression that capture the sadness, isolation and majesty of the environment. This is performed through gnarled, harsh rasping and a flood of melodic, raw guitars, not raw in the sense that he's aiming for bad production, but more in the fact that they sound like they might be recorded with a slightly more amateur/bedroom set of gear than a band with a bigger budget. The acoustics are actually quite well produced, along with some of the synth pads, but the distorted guitars definitely don't sound quite so professional...a detriment to some of the album's audience, but I actually found this component to create an authentic level of charm that helps it stand out sonically from a lot of its more balanced, brickwalled peers.

What I wasn't so down with were the robotic drumming, which just sound far too mechanical to really complement the synths, vocals and guitars. It's not that the beats aren't fit to the various blasts or other tempos explored, but they just break up the naturalistic intentions of the piece. While it's true that keyboards don't feel like a natural product of some windy hillside forest, the sustained melodies being performed with them come at you like whirls of wind from above. The drums just sound like desperation to create a percussive skeleton to the rest, and they leech away from its more organic dreaminess. Sometimes this works, with bands who have a more nihilistic/industrial slant or go for something more otherwordly, but I think they could have been mixed a little better so they would have been less intrusive to what is actually a very promising album, with glinting melodies and a sincere longing for its subject matter. The clean vocals also sound mildly goofy, but this is far less annoying since they are scarce and well-meaning, just rough around the edges.

Ultimately, Il regno della natura is a good debut, pretty heavily marred by this invasive contrast of aesthetics, but still worth hearing for its strong sense of composure between calms and storms, and a great use of melodies that I never found too dragging or predictable. A solid signing for Naturmacht Productions.