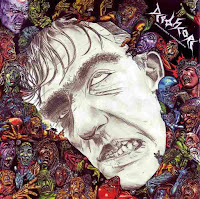 Long before becoming the classification for guyliner-drenched moshing metrosexual angst, Deathcore was a relatively unknown German band performing a splattering of punk and grindcore which felt almost as spontaneous as they hinted at with the title of their Nuclear Blast debut. Looking and often sounding like a lost Sore Throat or Lawnmower Deth recording that never made it out through Earache the same year, Spontaneous Underground does nonetheless manifest a small sense of personality in juts how ugly and un-fucking-caring it sounds, the epitome of a bunch of dudes in jeans, high top sneakers and whatever hand-me-down metal attire they could scrounge up writing a bunch of violent, energetic music that cares little about subtlety or intelligence.

Deathcore actually draws on a number of influences, from the grinding Earache outlets up north of them in Britain, to the crossover thrash endemic to the US West Coat circa D.R.I., Cryptic Slaughter, and The Accused; you might even hear a little S.O.D. in a particular breakdown or two where the band pulls on its splattery reins for a couple bars. Loads of rehashed punk riffs sped up to a junkie pace, and then splayed out with other sections into longer-than-expected tracks. Spontaneous Underground is a long, long damn album for its style, clocking in at over 52 minutes, with tracks ranging from five seconds to over seven minutes in length, a few clicks of a beat and some chords to 'epics' that are constantly shifting around all over the entire riffing and tempo palette of the band. To be honest, that's not saying a lot, because I swear there are a hell of a lot of riffs on this album and almost all of them are the most insipid, forgettable sort that don't seem as if they took more than actually applying your palm and fingers to your guitar to create.

Looking for any sort of interesting progression of chords? Seek elsewhere, the only time you might be surprised at all here is when the guitarist throws out a noisy little spontaneous noodle or weird indie rock riff ("Dolphin Instinct") which feels more like a mistake than anything else. The vocals and lo-fi nature of the recording definitely save it some punk cred, since they have that timeless, earnest, amateur quality about them which we venerate on a lot of early punk and hardcore recordings. But man, when you consider just how much material this band is tossing your way, it's a damn shame that so little of it actually sticks. The loose fills and cadence of the drums, the splatter-style vocals set at various levels of shouts, screams and saturation, and the unfortunately-rebranded band moniker are all things that widely outlived the actual guitars and songs, and that's sadly just not what I seek out in a record like this. That said, it's mildly interesting in its obscurity for being on a label that would go on to explode as much as this one; and not terrible if you dig the DIY mentality usually associated with its style.