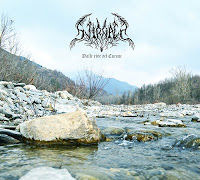 It would be dishonest to claim that Dalle rive del Curone entirely fixes the one glaring issue I had with the Svirnath debut, but I think to some extent the drums here have been dialed back just enough so they don't become some distracting focus of what's on the disc, and the whole package benefits from just this minor tweaking. There are a few other tangible differences from that prior work which also lend to this becoming the stronger of the two works, although stylistically it barks up the same general tree of naturalist, atmospheric black metal which goes for a broad and picturesque sense of glory and melancholy rather than the sinister and dissonant ethics of the earlier black metal tradition.

Acoustic guitars here are pretty much on the level of the first album, perhaps slightly richer, where the electrics are definitely more streamlined with higher production than the tinnier tones you'd have heard there. Riff-wise, I think this album focuses in more on stronger rhythm guitars with cooler inherent melodies rather than saucing over everything with the thinner little note-streams that were dominant on the debut. Not that they don't exist here, but there's a better balance. Another change is that the vocals sound less trebly and a little more tortured and verminous, partly because they are mixed in a little better among the instruments. The synths are still produced very well as a backdrop, often fully complementary to the guitars without stealing any of their sadness and grace. He uses some cleaner choir-like vocals, often in conjunction with the rasps, and I thought they worked out better than the few cleans from before, although still not perfect.

A lot of tempo stop/starts here with the rhythm guitars getting to set up the momentum, and it works well since the guy just makes likable chord progressions...not highly original, perhaps, but certainly evoking that sense of wonder the project strives for. And as I mentioned earlier, the drum beats are mixed in far more here, with more hi hats and splashes to offset the thundering lower impacts. Often he'll really take you by surprise with some harmonic thrust of guitars that erupts in the middle regions of a particular tune, and these tunes seem generally longer on the debut, there are less of them but they fill up that bulk quite well. Svirnath has plenty of room to still grow into, and Dalle rive del Curone is likely not the breakout album, but I found it superior to its predecessor on many fronts, kept me dreaming of foreign woodlands, streams and the long span of natural history that led to my own being, and I quite look forward to what Frans comes up with next.