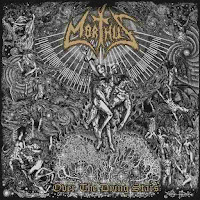 Over the Dying Stars is an album with a lot going for it that just doesn't seem to resonate with me for long. I think it has something to do with how the record divides its time pretty evenly between both the melodic black and death metal genres, but rarely does it seem to excel in either category. From the outset, it's an appealing looking album with good cover art, and hails from a scene that has long produced triumphant extremities in both of these extreme metal categories. It's also out through Witching Hour Productions, local to the band in Poland, a label which has produced quite a lot of killer material over the years, often surprisingly so. But when I actually sit through the music here it just comes off rather standard.

Not that this has anything to do with the band's skill level. They can blast away at the kit and offer up barrages of chords and streaming tremolo picked notes satisfying enough to the purist, while also taking a few chances to alternate into slower, spacious sections where you'll feel more of the bass fill and can set up something dramatic. Occasionally the riffs get a bit more grimy and groovy, simplified to a near-crust level, and in others it almost feels like primitive melodic death circa the early 90s. I also found they were able to generate some excitement with transitions and breaks, but these are too often neutered when there aren't any great riffs to follow. The drums are heavy as hell, and the bass is pretty audible in the mix, but they don't add a lot to the constantly driving, predictable personality of some of the material, although if you want consistency I can promise they bring that.

The vocals are decidedly death metal, shifting between a couple different guttural timbres, some of which are fleshy and gruesome, or placed at a point where the  others being a lot more bland, blunt instruments. Other voices are often employed for backup shouts so there's a bit of variation there that helps compensate from how that main brute growl leaves you underwhelmed. All told, I don't want to leave too much of a negative impression, Morthus are certainly proficient at what they're playing, they simply don't offer up much for me here by way of interesting note progressions, savage or evil fare that makes me want to keep listening though the disc. It would really only take a few tweaks to more interesting tremolo guitar line, or atmospheric contrasts that transform them from a decent act to something with a lot more impact. Over the Dying Stars just seems to stand somewhere in the middle of a very long line of similar groups (from both genres) who have done it better.