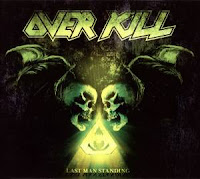 The Last Man Standing EP is another of those limited edition CDs packaged in with a metal magazine from Europe; this seems to be a pretty big practice over there, and very often for long-enduring thrash acts. At any rate, we have to take it for what it is, a two song sampler of their then-upcoming full-length The Wings of War, with a few goodies thrown in to make it somewhat a potential collector's item. While these sorts of magazine exclusives don't get me all that jazzed up as they might have been when [b]Sabbat[/b]'s "Blood for the Blood God" came packaged as a flexi-disc in an issue of [i]White Dwarf[/i], I can see their value as a way for the declining print publications to offer something more to their readers, and for the bands that benefited from such press for decades to help out without going far out of their way.

The two new songs, while not the catchiest of their career, continue along the same track as what you'd have heard on White Devil Armory or The Grinding Wheel; modernized thrashers that draw from all the band's eras of growth from the mid 80s through the 90s, catering to audiences that might have plugged into the band's fanbase through any of that time. "Last Man Standing" itself is a broad, fast thrasher with a passable riff thrusting it forward and 'Blitz' sounding just as vitriolic and ready to smash up a stage (or bar) as you can imagine he'd ever be. Decent leads, palpable energy, and big production truss up what is otherwise a pretty stock sounding tune for their Ironbound-to-the-current phase. "Head of a Pin" focuses briefly on one of their big, loping Sabbath groove riffs that the band had strongly integrate by the time of Horrorscope, but then picks up into another thrasher with a riff that is again, somewhat catchy, but plays second fiddle to Bobby's manic screams. That said, I liked it better of these two for the structure and the bridge sections.

After that comes the 'bonus content', a pair of tunes taken from two Rock Hard Festival gigs in 2015 and 2018, "Hello from the Gutter" and their cover of the Dead Boys' "Sonic Reducer". The latter is a little more even across the instruments, whereas "Gutter" is a bit loud on the guitars, but either way they are solid if unremarkable recordings which convey what they need to. Lastly they've included a cover of "We Gotta Get Out of This Place" by The Animals, which was previously available as a bonus track on the Japanese issue of Bloodletting. It's little more than some banal chugging and chords, but the vocals once again carry it, transforming it into a punchy, mildly entertaining piece despite the shortcomings of the guitars that don't satisfy much in a metal context. I would guess a hardcore Overkill collector already had this in his or her collection, but if not then your prayers have been answered.

As I said above, Last Man Standing is not exactly a retail product and shouldn't be held to the same standards as a maxi-single, or a compilation, etc. Were this an EP out in shops then I'd probably look further down upon it since it doesn't offer up anything much that you'll not find elsewhere. But if I'm flipping through Legacy magazine and come across this, it's a moderate bonus that might entertain me for 20 minutes if this is a genre or band I enjoy, and while it doesn't perk me up all that much for The Wings of War blowing my speakers, it's not the shittiest promotional effort I've come across, but there is nothing essential here whatsoever as the best tunes are the new originals and both would be coming on the full-length.