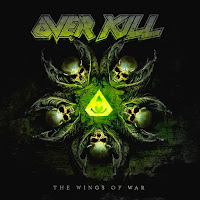 The last decade of Overkill studio albums have suffered a little bit from an interchangeability issue, in that you could lift a few tracks from this or that one and plant them on another with only minimal production tweaks and few would notice the distance. But that's not necessarily a bad thing in Chaly's case, because the band maintains a high level of energy and consistency so far into its career that you have to wonder what nutritional supplements the members are all taking. As a guy who hasn't truly been 'blown away' by anything during this Ironbound era, and yet enjoyed pretty much all of it for a few spins, I'm hard-pressed to think of individual tracks that I had much disdain for. At the worst, 19 full-lengths in, you could say that they suffer from a little bit of bloat. A bunch of tunes could only ever serve as backups for similar, more exciting tunes that have already carved out the band's legacy, and the only real dynamic power you're going to experience is in just how Bobby 'Blitz' Ellsworth decides to lay out all that lyrical bravado...where will he scream, where will he shout, where will he sound like an imp nagging you from the sub-cellars of Hell?

That's not to suggest that the musicianship here is anything short of what it needs to be. All of the group's thrashing trademarks are present. The meat-chopping guitar tones pregnant with palm mute power that gives them a little more pit cred than other genre acts. The bounding bass lines from one of the most dependable anchor-men in the entire metal business. Shadows Fall drummer Jason Bittner succeeds in his debut with the band, giving a performance which never steps far beyond what you would expect to hear, but does so with thunderous precision. And Blitz is still the guy that can dress up a pretty average thrash riff, even by decades old standards, by spitting so much hard luck tough guy wisdom and charisma with those cringey, psychotic tones that you'll hardly care what else is going on as long as continues to hammer into you brain like endorphins. He does sound a little more processed here than normal, but so do some of the instruments, and it balances out rather well even though I think I much preferred them in the context of those more organic mixes on the first couple LPs. But Overkill has always risen to the times in terms of its production...in the 80s, the 90s, the oughts, and these new teens, they sound like a band staying current, clapping some newly forged steel girders onto the songwriting aesthetics they've ever-so-slowly refined since '84.

The Wings of War is a dynamic album too, balancing off the more muscular thrash momentum with the a few big Sabbath grooves they've so long admired, or slower, structured moments that give the listener the right amount of relief before reintroducing him/her to the manhole-cover moshing force that the band has so long championed. They still know how to balance out these two sides without ever becoming too annoyingly groove like a shoddy nu-metal act; rather if you're looking for that NY fix of a Madball, Biohazard, Cro-Mags or early Life of Agony, Overkill remains one of those rare groups of longhairs you can trust to give you the goods. If you were thrilled by their recent crop of records like The Electric Age, White Devil Armory and The Grinding Wheel, then I think they're sticking quite closely to that territory without abandoning a little inspiration from the earlier decades that have stretched out behind them. Superficially, I think the album is really rock solid in its balance of riffs and vocals, constantly supported by that rumbling ruckuss of Verni and Bittner and sure to remind any passersby of your car stereo that you're a person who means freakin' business.

In terms of its staying power, though, I don't think it's quite there at the modern classic level. A few of the tunes like "Believe in the Fight", "Where Few Dare to Walk" and "Out on the Road-Kill" absolutely make my modern Overkill playlist along with the choice cuts off the last four discs, but others, including the two from the Last Man Standing EP, are in one ear and out the other. Again, there is nothing particularly 'bad' about anything on the album, but the individual riffs just don't score that much for me. "Welcome to the Garden State" is kind of endearing in that they created this pure punk metal homage to their home turf, and the lyrics are no doubt funny, but musically it's just not my bag since it feels a little predictable, only more metalized than the dull punk anthems we were forced to endure on the radio 15-20 years ago when that Orange County sound became cool again. Some of the elements in "Batshitcrazy", from the grooves to the leads all rub against one another a bit too much, although the title is a great little paean to the band's mascot when you think about it.

Ultimately, it's a reliable hour of power with a band you've experienced so often before that the colors begin to run together with other recordings in recent history. But there are only two colors...green and black, and they've now been swirled together in so many familiar auditory images that there is not a lot of creative space left to dabble with on the canvas. Saying it's 'another good Overkill' album is just like compromising with your significant other and ordering a pizza from that place that isn't quite your favorite but you'll happily eat for the sustenance and to avoid an argument. I'm not going to turn it down...it's got the meat, the cheese, the bread that my tummy needs. A filling 60 minute meal, but it's not some masterpiece ratio of toppings that will have me salivating for years to come.