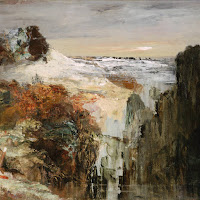 There was a little disconnect for me between the packaging and musical contents of Solstices; where the lavish, beautiful cover artwork seems to hint at a highly naturalistic, atmospheric brand of black metal, the music itself is like a blunt weapon, a wall of force anchored in huge, doomed grooves slathered in the dissonant pickings and harsh vocals more associated with black metal. That isn't to say that this Heaume Mortal debut is bad, not whatsoever, but to me there was a slight contrast in aesthetics which trumped my expectations. Fortunately, both sides of that divide are quite good...the artwork is euphoric to look upon, and to dream of its broad vistas of glaciers, roaring falls, and autumn foliage; a few of the lyrics also reflect this imagery.

The music, much more crushing, urban and personal, but no less effective. Like a number of other acts on this label (Les Acteurs de 'Ombre Productions), there's a focus here on longer tracks, from about 10-14 minutes, and they fill those with this robust blend of black metal, sludge and doom with a lot of belly-felt force and a rumbling lower end. The guitars drudge along with potent chords, slathered in dissonance and horrifying vocals drowned with enough effects that they seem to be shouting at you from a sewer or abandoned building that is crumbling from the very intonations. The groove is highly central to their sound, but they can even pull off such swollen tunes since they are never too repetitive, tossing in chugged sequences, or emergent melodies that constantly shift the turbulent landscape. The bass sound is fat and wholesome, with just enough buzz on it that you can feel it down in your bowels as those grooves lope along. The drums are more rock oriented, which works at the slower pace of the style, but can power up when necessary.

It was curious that they had one furious, shorter 2 minute track in here called "South of No North", which spoke to me that their style could easily fit more digestible, bite-sized material, but even more interesting that they plopped a cover of "Erblicket die Tochter des Firmament" smack dab in the middle of the album, and not only that...but adapted it much to their own style. It captures the longing and helplessness of the original, but with that fattened up bass and those disgusting vocals, really making it into a piece that fits themselves...which to me is the hallmark of a good cover song, doing it that honor without just copying it. It's quite a good addition to an already solid album from a band that I think will have a huge appeal not only to French black metal fans into Glorior Belli or certain Blut Aus Nord albums, but also sludge maniacs into stuff like Eyehategod. In fact they really fit in with some of their labelmates like Heir. It's a cool mash-up style with a lot of potential, much of which has already been realized by this trio. So check them out.