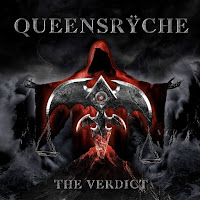 I suppose after the triumphant Condition Hüman three years ago, my favorite Queensrÿche record in the 27 years leading up to it, I was bound to feel some level of disappointment for its inevitable successor. After all, to aim in the other direction, they'd have to come up with a masterpiece unheard of since the 80s. With The Verdict now in my hands, I have to say that even my tempered expectations for the third Todd La Torre-fronted album would turn out to be too high, because this one partially returns to the relative mediocrity of the eponymous 2013 effort, an album that was very well intentioned but just didn't have the hooks or vocal lines to really impress me. That's not to say this one is bad, and in truth it's stylistically in line with its excellent predecessor, but I kept waiting for those sky high hooks and melodies to engrave themselves into my memory like a "Guardian" or "Bulletproof" did, and it just wasn't meant to be...these just pop right out the opposite ear and life goes on as if I'd never even listened to the thing.

I'd like this to an update of 1994's Promised Land, with that same concoction of progressive and groove metal, driving a little harder than the commercially colossal Empire, but just lacking the great hooks they could come up with back then, or the overall atmosphere and majesty of that album. This one feels as fat and modernly produced as their last album, only that clarity isn't being used to push their best material. Lots of those Eastern-flavored, Tate-like vocal lines populate tunes like "Light Years" or "Propaganda Fashion", driven by Rockenfield's loud drums, but I feel a lot of the groovier rhythm guitar riffs on this album are entirely too bland and predictable, not as thoughtful as what this band has been capable of in the past. The ballads are likewise forgettable, with glimmering acoustics that hearken back to "Silent Lucidity" but no potential at all to be that radio ready. "Dark Reverie" was one of the more solid tunes here, starting off soft and picking up into something enormous, but this too is plagued by a lack of strong ear-worm vocal lines. There are in truth a few choppy metal riffs throughout, but the guitars just don't pan out into interesting progressions except maybe on the track "Launder the Conscience" with its perky melody. Too many are banal, and the leads, while fittingly placed and appreciably emotional and gleaming, aren't enough to elevate the total tracks.

I feel that too much of this disc is left upon the shoulders of la Torre, and while the guy still sounds like the perfect replacement for his infamous predecessor, he's just not working alongside good enough riffs on this one to sell it. The production is massive, but too modernized and polished to feel natural at all, which is not the first time, but harder to overlook when you're not having fun with the tracks. Don't get me wrong, it's slightly better than the self-titled, and far superior to later Tate-era albums like Dedicated to Chaos, Operation: Mindcrime II or Q2K, but with so many other prog metal bands out there exploring such wide swaths of their styles and instruments, elder statesmen like these heavily depend on writing those enduring songs. While lightning struck for me unexpectedly in 2015, this one barely gets beyond a slight, static discharge. I'd honestly go a lot more towards the mid 80s metal direction, which dates you in a positive way, and ditch all the tidy 90s alt-rock groove licks that date you to your detriment, as they have almost all the Queensrÿche albums that so tediously employed them. They hit the target once in awhile, but too often fire off like blanks.