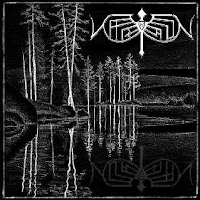 I'm a sucker for a distinct logo, and Germans Carthaun have one that instantly stood out to me, a little hard to make out at first, but I really dig the symmetry and symbolism. The stark imperialism of the logo imposed over the reflection of the trees on the lake (and itself) was a nice touch, and it also looks pretty cool on some of their late album covers. Now I wish I could say the same for the music on this debut album, that it somehow stood out among the flock of European (or specifically German) black metal acts, but alas that isn't the case, at least not for Einheit, which ends up a pretty bog standard recording that, while not particularly terrible, might be interchangeable with hundreds of lesser tier bands from the same era and geographical location.

This is largely blasted black metal with a sound not unlike an Endstille, only around the same time they were doing this, that band was coming up with more hypnotic note patterns to fuel albums like Navigator and Endstilles Reich. Carthaun executes a mix of predictable, straightforward chord selections that feel banal even looking back at 2005, with a few more atmospheric, melodic guitar lines that instantly feel like they elevate the record beyond the former. I especially liked how this latter category of riffs blends in with the swerve of the bass lines, and this is definitely the direction I wished this album pursued a lot more of, but it just doesn't go there quite enough. I do dig the bass playing on the record, it's nothing too technical, but a little more involved than your average four string strummer who might follow too closely to the guitars. The drums have a jamroom feel to them, not too thunderous or powerful or overproduced, but kind of bland in terms of beats and fills, so they never transcend the mere adequacy that this sub-genre demands."

Vocals, on the other hand, are the flat-out worst part of the album, a raucous rasp that sounds like Salacious Crumb from Return of the Jedi choking on one of Jabba's concubine's chains. They sound too flat and mid-range in the mix and kind of smother the simpler, less burdensome guitars alongside them. I'm not convinced that they'd be all that bad if they didn't have such a blunt and uninteresting way that they were mixed into the recording, the more atmospheric guitars and certainly the bass have a mood to them which just isn't served well by all the barking tones. Very amateur sounding, and I found myself desirous of any part of the music that did not contain them, just to escape. Not a great start for Carthaun. It looks cool, but fails to impress to deliver even a raw, paint-by-numbers, traditional sort of black metal. To be fair, what I've heard of later albums like Brachland or Staub und Schatten is quite a bit better than this material, so if you stumble across that sweet looking logo and determine to check them out, head straight for their 2012 and 2015 offerings.