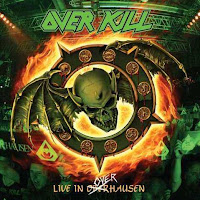 The Live in Overhausen double-live record is a fairly interesting concept...while a lot of veteran bands have been touring off performances of their seminal albums in their entirety, it's a rare thing to see one take on TWO at once. But that is exactly what Overkill has done with this release, pairing up Horrorscape and their debut Feel the Fire into a double album that must have been a big thrill to fans of their first decade of material over in Germany. The material is presented as a live Blu Ray with the full spread of the performance, and then two audio CDs for each of the albums in case you want to play them in your car or at work if you don't want your wife or boss recoiling from the sweaty East Coast thrashing.

Now, full disclosure here: I'm on record as not being the biggest fan of Horrorscope. It's got some strong moments, for sure, and is far from any sort of career nadir, but I felt this was the point where the band started to evade my interests. It's part of my 'curse of 1991', a year in which a lot of bands I enjoyed put out some records I thought were 'just okay', but a swell in the metal audience made them all successful regardless. There's no question that the band had been building up quite a following through its first four albums, and I've met fans who honestly think it's their very best work. I don't get it, I mean there are single songs on Taking Over I prize more than the whole affair, but what can you say? I'm a far bigger proponent for Feel the Fire, which remains my second favorite of their offerings ever after the 30+ years I've been listening to them, still an exciting debut that gets some spins here, so we all know which disc (or half of the gig) I was anticipating more.

Having said that, the Horrorscape material sounds pretty faithful and well-performed, considering they probably had to really do some digging and prep-work in the rehearsals to summon this all back up. The guitars are chunky and forceful, the drums and bass adequately mixed, the vocals sound good and the crowd response, chanting and pounding away really works well in tunes like "Coma". There are a few elements which sound a little dry, like the lead guitars, but really if you want that meaty moshing thrash stuff like in "Infectious" the rhythm guitar and bass tone got you covered, and the audience clearly appreciated it. All in all, even for someone who's not a huge fan of that record I would say they do it justice, and it's a dynamic record which translates well into a set. However, Feel the Fire is just so much better...tunes like "Rotten to the Core" and "Hammerhead" retain all of their ages-old frenetic energy, Blitz sounding like he's coming unhinged, a quality that is actually drained a little with the backing vocal or crowd interaction. It's cool to hear it all performed out like this, from the aforementioned thrashers to the eponymous, eerie "Overkill" to their legendary cover of "Fuck You" by The Subhumans, which closes out the set in all its vulgar grandeur.

The video looks pretty good too, lots of lights flashing everywhere, the musicians performing their parts effortlessly. There's not a ton of motion here, I mean I've seen the band when they (and I) were much younger and they put on more of a crowd pleasing, savage physical presence, but considering the age these gentlemen are at they come off as consummate professionals, especially Verni and Linsk. I appreciate metal DVDs and Blu Rays as proxies for actually being there, and this one is worth a view, but there's not a huge level of dynamic change happening throughout the two sets, it can grow a little samey to watch, so I'd recommend it in smaller chunks or just forward to your fave tunes. Altogether a good package for Overkill fans, I liked it more than Wrecking Your Neck Live or Wrecking Everything Live, and I say that's without being crazy for half the material they're playing.