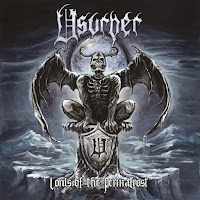 If you had seen or experienced some of the crazy low temperatures these Chicagoans had experienced during the cold snap of 2018-19, then you'd be reassured they can lay claim to the title they chose for this reunion record. Of course, you could also translate it as a clever homage tracing back to that legendary Swiss band which influenced these guys since their inception, so it works on a number of levels. In any case, Usurper has produced its first new studio album in 14 years, and since the simplistic, iron pulsing blackened thrash style they perform in is not one that ever really goes out of style, Lords of the Permafrost doesn't sound like it's missed a single beat. In fact, I'll go beyond that to say that within just a few spins I've decided that I like this more than anything these dudes have put out since Skeletal Season back in 1999.

Without reinventing their formula, or really any formula, Usurper succeeds in sounding refreshed at what they've offered us all along, steady treading, fist pumping thrash metal with riffing progressions that don't sound advanced whatsoever from an 80s mentality, but remain convincing, entertaining and by their own measure, rather brutal. Hellhammer and Celtic Frost are the obvious starting point, but the band hits a lot harder in terms of percussion, and they shift into faster paced, moderate blasted parts which balance out the grooving, mosh-worthy ballast. The rhythm guitar tone on this record is fucking awesome, chunky and voluptuous and repeatedly fisting you in the abdomen while the thick bass lines reinforce it. A couple of riffs where this is most evident have an almost slower-paced vibe similar to Slayer in the late 80s, and the chord selections also have that same sort of chilling, evil feel, with maybe a little vintage Sepultura chucked in there. The leads are likewise great through the album, appearing exactly where they need to be, sounding frivolous and wild enough yet structured, and really round out the whole experience.

I think it's the vocals though that truly bind the album together, gut-fed, hostile paeans to the Tom G. Warrior syllabic crudeness but with more of a death metal, grumbling sustain to them, and then they are often backed up with some other growls or shouts, even some somber Goth-like cleans in the tune "Beyond the Walls of Ice" which honestly got me up out my chair circle pitting around my office/game room table like a denim & leather neanderthal, regardless of the fact that I'd heard these riffing patterns before probably a million times. Lords of the Permafrost is exactly that fun, it never tries to be anything more than an added spike in Usurper's blood-spattered epaulet, and there is just enough variety between the slower and faster sequences in the tracks to keep it engaging and not fall into some sodden, repetitive wreck. Nothing new for this band, sure, but I actually thought that, at least as far as the production quality, this was their best and most immediate sounding album, and I'll happily reach for this off the shelf as often as my previous favorites in their discography, Skeletal Season and Diabolosis... Ice crushing hesher mayhem.