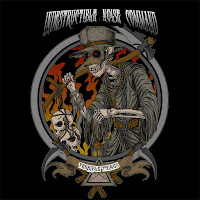 While Black Hearse Serenade was a sizable improvement over the first 'reunion' era album from I.N.C., Terrible Things is a bit more of a baby step forward in quality, and an album that sounds like a quintessential slice of New York thrash, an evolution of the style that bands like Anthrax and Overkill laid out throughout the 80s. In fact, it's an album that is very likely to appeal to fans of those two bands, especially if you were keen on their material through the 90s when they were trying to explore their sound envelopes a bit more with some groove metal, but not limited to that. This album also drops off a bit of the Pantera sound I felt had infested the two albums prior to it...perhaps not entirely, but it's been replaced here by some good gang shouts and a lot more fast, thrashing energy, threaded with some classical, memorable leads like in "Identifier".

This album hits hard and it hits quick, packing a lot of punch into 3-4 minute tracks, and almost always having a nice surprise tucked in there like the harmonized, higher pitch shouts at the climax of the aforementioned "Identifier". They use some catchy, descending harmonies akin to stuff that you'd hear from Slayer or Testament in their classic phases, and the selection of riffs through the album is an even balance of the powerful-but-predictable sort and others that are just plain neat. Not only is the music the best they've written in the 21st century, but the vocals are really on point here, with a kind of blend of shouts, barks and melodic chorus parts that almost seems like a mix of modern Anthrax and Germany's Paradox (check the chorus for "Declaration"). Power/thrash metal would not be a bad tag for this stuff. The bass tone is better, the drumming is exactly what it needs, and like the prior album they incorporate plenty of dynamics from outright frenzied thrashing to some brief and appreciable breakdowns that don't ever teeter on cheese. It's also a consistent disc, I kept waiting for the other shoe to drop, like there'd be 3-4 good songs and then the rest might be rubbish, but the quality is evenly distributed throughout, and I think some of the better chorus parts and riffs are even backloaded on the thing.

A few of the lyrics are a bit too plebeian and mediocre, and as I said only about half the riffs are really sticky, but Terrible Things thwarts its own namesake to easily take the crown of anything I.N.C. has accomplished since its reformation. The effort and resilience here really shine through, and this is one I'd have no problem recommending to fans of modern 21st century thrash which doesn't take too many bites of the retro pizza, but attempts to enhance or re-imagine a band's primal 80s style into a modern context. I think there's just as much an appeal to Euro thrash or power/thrash fans of Destruction, Artillery, Accuser, After All, and Paradox as I.N.C.'s own New York peers. It doesn't have the quirky personality that their first two albums had 30 years ago, and if I were in the mood for I.N.C. those are what I'd still reach for, but if you think of this last decade's releases as a different band, this abolishes its predecessors, and hints at even greater potential going forward. It's also pretty satisfying to hear a veteran band bounce back like this after splashing around in the stagnant puddle that was Heaven Sent...Hellbound. I.N.C. is now worthy of your radar again.