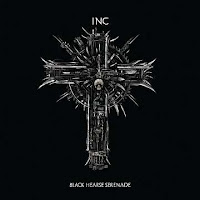 While they were never in contention as being one of the better East Coast thrash bands in the 80s, the Indestructible Noise Command was still a silly, fun group which clearly put some effort into their riff-sets. In fact, they actually had come up with a pretty unique sound that I found easily identifiable, separate from their humorous peers in Ludichrist or M.O.D. So it was sort of a bummer that over two decades later they'd release an EP and third album which felt as if they'd been corroded by banal 90s groove metal influences to the extent that they really didn't sound much like the same group. Oh, you could still tell they were thrash at the core, but the personality of those Giant Records releases was all but scraped off the bone and we were presented with something that didn't really have much to offer anyone who actually had nostalgia for I.N.C. in their formative years, or really any fan looking for a decent thrashing in 2010-2011, whether contemporary or retro.

However, while Heaven Sent...Hellbound could have just been a one and done (or one and a half and done with the Bleed the Line EP) midlife crisis attempt to tug at their roots, it turned out these dudes were serious about being back, and a few years later release Black Hearse Serenade. Right from the onset, this is an album that certainly doesn't look like it's fooling around, and probably not endowed with the comical elements that made their first two that endearing. Indeed, this album sounds like a hybrid of Pantera, Pissing Razors and Anthrax, still moored in some 90s groove influences but to be honest, there's quite a lot of honest thrashing material here which is far superior to the material they dropped in 2011. Busy, hard-hitting riff patterns that constantly keep you guessing, even when they burst out into some pretty vapid grooves, and some decent guitar leads, speed picked harmonies, and so forth. They certainly sound like they were technically proficient enough to compete along the groove/thrash hybrids we heard a lot of through the mid to late 90s, but with a production that suits this past decade snugly. You can tell there is quite a lot of effort placed into the composition and the execution throughout the entire album, and the riffs often border the technical, with a lot of punchy muted patterns devoted to making an audience's necks sore, potentially other body parts.

Now, don't let me deceive you into thinking I liked this one all that much, because for all that work put into the instruments, they almost all fly in one ear and out the other. The note selections are just not all that catchy, and while it's busy stuff, and unpredictable, it's not ultimately interesting. I also didn't care so much for the vocals...unlike the early years of I.N.C., Dennis' style here is like a schizoid combination of Phil Anselmo's tough guy drawl and Belladonna's soaring New York clean vocal style, perhaps even dusted with a little of the John Bush style in the chorus parts. Once again, plenty of effort when into building these vocal lines, they never feel cheap or ill-conceived, but I think it's just that I'm not really into the style other than some of the songs from its originators. If you put this side to side with Razorback or The Visitor, it really doesn't sound like the same band at all, and about a decade too late for when it could have made its maximum impact. That said, this one is far better than Heaven Sent...Hellbound, it's much better than stuff like Damageplan, and I found myself appreciating at least that this band took the style it was using a few years earlier, sharpened it up and went all out here. I think if you're looking for something like a more 'purely thrash' Pantera then this one might be worth your time to at least check out, but I'll stick with the early stuff.