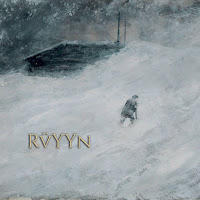 The cover artwork for French RüYYn's eponymous EP is the sort I am a sucker for: a windswept, wintry landscape with the hint of some dark, ominous, possibly empty structure in the backdrop, partly covered by the dunes of blowing snow, with a figure struggling through the storm. This is instantly evocative (one hopes) of the sound the act is pursuing, and whatever else I might say about this Roman-numerated track list, there is absolutely no false advertising. The half hour of material here sounds like you are increasingly being buried in the winter drift, or whatever trials and despair and emotions it is serving as a stand-in for. The mix on this material is also quite strong, typical for the Les Acteurs de l'Ombre Productions stable, there is a stark professionalism to the sound that one expects from far better situated acts.

The primary issue I ran into here was that many of the chord patterns, in both the surging storm-like blast sequences and some of the slower passages, were rather mundane and predictable. Now this was a double edged sword, because while in the moment they don't really evoke anything interesting beyond what is needed to sound like the EP looks, they also make the few standout sections stand out even further, like when that melody breaks out in the depths of track "I", a dreamy, almost post-black rush of catchiness that one probably wishes there were more of. Also, there are some nice, dissonant riffs that occasionally offset some of the prime chord patterns, but not as much intricacy on the whole that these tunes could probably have held. The influences are all straight on the sleeves...Mayhem, Bathory, maybe a bit of the simpler Immortal or Marduk stuff, though the slight nuances I've mentioned do differentiate this slightly. This is also the work of a single musician, Romain Paulet, and he's certainly as efficient with the thundering beats as he is with the guitar and the rasping vocals.

So RüYYn is stable introduction to the project, and if you're dreaming of blinding white winds, ice-scraped skin and utter desolation, this will make for a reliable soundtrack, if not a terribly interesting one. The DigiPak packaging is gorgeous, the production exactly what is required, the intensity and energy is not lacking, it simply deserves a little more variation within the compositions themselves, more riffs to stick in you ears and create a proper hibernal haunting to accompany the imagery. But I can't be too hard on it, this is an act only started THIS very year, so if you look at this as sort of a demo offering, there's probably not much that can't be accomplished with a little more effort, since the technical side of things is already at a proficient level of delivery.

Posted by autothrall at 5:00 AM