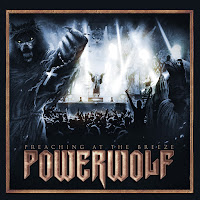 Preachers at the Breeze seems like an act of pure redundancy after The Metal Mass - Live from the year before, with the caveat that this one I believe was technically recorded BEFORE the other, at the Summer Breeze Open Air in Germany the same year (2015). I don't know if there's a huge market for Powerwolf live albums with a following similar to Dave Matthews Band, Grateful Dead or Primus where you've got rabid fans that want recordings of every show the band performs, but that's doubtful since these Germans aren't really known to improv or structure their sets drastically different than one another. As such, this feels like a total waste, especially on the heels of that great live package the year before, and several others they had put out through magazines or limited editions or whatnot.

I also think this one sounds a little rougher than The Metal Mass - Live. Perhaps that was due to the festival atmosphere, the far bigger and louder crowd, but while you can pick out the 'highs' on this album like the pipe organs and Attila's voice quite well, the guitars seem a little murkier. Overall, I would be satisfied if there wasn't a better option. The set list is also practically identical for both albums, with only 1-2 exceptions, like this one has a slightly different intro and is lacking two of the tracks from that later set. Makes sense, since the list is from the same stretch of months in the band's history and it wasn't likely to change much, but it just makes you wonder why this needed to really exist in any capacity. If you're actually on the prowl for one of the Germans' live packages, this one certainly isn't bad, but spend the money on The Metal Mass - Live if you're seeking after an audio live album you can play in your car. I think this also might come with a limited edition of Blessed & Possessed, so if you're getting this, that album, AND the covers album, it's more worth your while. There's something to be said for consistency, and at the very least they show it here in terms of production qualities and packaging.

Posted by autothrall at 3:59 PM