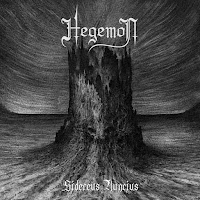 While they might not have made a large splash beyond the immediate French black metal scene, Hegemon have actually been at this for a quarter century now. Their last two albums (their third and fourth respective full-lengths) dropped on the Season of Mist Underground imprint, and now they've transferred to the Let Acteurs de L'Ombre Productions roster where they could not be any more at home. This is yet another act which takes a heavy lesson from traditional black metal formulas of the Scandinavian sects, and then adds just a spin of their own personality and dissonance atop of it to keep it form becoming too derivative or repetitious, and the beautifully packaged, desolate Sidereus Nuncius just clobbers the listener with despair that often teeters upon a dangerous knife-edge.

The overall riff-set here might not be the catchiest or most interesting you've heard from a scene which produced luminaries like Blut Aus Nord or Deathspell Omega, but it's really tortured and robust, with a lot of swells of ambience in the backdrop that beautifully align with the menacing guitars and ever raging blast beats and incredibly potent double kick drum sequences, with some great sounding crashes on top of hte percussion. To an extent, the way some of the material here roils with the touches of more memorable dissonance actually reminds me a lot of what some of the forerunners of the Icelandic scene are doing, like a Sinmara, Slidhr, Svartidauði or Misþyrming, only many miles to the South. Controlled bursts of chaos incarnate occasionally break for a mild sense of melodic surging, and though they don't often paint with the broadest of brushes for their riffing palette, the songs are kept tight in the 4-6 minute range so they simply cannot suffer from the tedious repetition that some of their peers might succumb to. They certainly play around with the formula enough, through guitars, synthesizers, and a darkly charismatic vocal presence which raves, barks, snarls and whispers to a maximum, manic effect.

Sidereus Nuncius is clearly a product of experience and well worth checking out if you're out combing the black metal underground of Europe for acts that can deliver a seasoned, menacing assault. I spent a good amount of the time listening to this glancing over my shoulder or facing some other sort of internal trepidation and nervousness because Hegemon fundamentally understands that black metal is meant as an evil, oppressive art form, and like many of the best of the tradition, this record embraces that threatening nature to create a dark trip which never outstays its welcome, and yet has a lot of intricacy from the spikes of diabolic blasting, to the sublime groove of the bass lines, tasteful cleaner guitars, et all. It's not the most unique thing you'll ever hear, granted, but will make for a great spin on the grayer days of the upcoming winter months.

Posted by autothrall at 1:24 PM