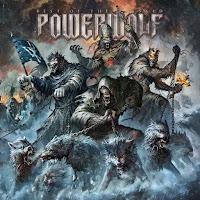 I adore me some Powerwolf, but the last 5-10 years of the band's career have been littered with stuff you might consider cash grabs, from the number of live offerings, limited edition or otherwise, to all the other stuff like deluxe multi-disc versions of all their albums, covers album, orchestral versions, and so forth. Some of these, like The Symphony of Sin, Metallum Nostrum, and The Metal Mass - Live, make for pretty good products, but even then I'd have to say the band is laying it on thick, perhaps victims of their own productivity or maybe they just really need the cash?! Or maybe some of these weren't really the band's ideas. At any rate, Best of the Blessed is the 'greatest hits' package you just knew was coming, and at the very least it offers a pretty good amount of content, depending entirely on the version you buy.

And by that I mean, avoid the standard single disc edition entirely, because it's not a good value at all. 16 tracks, about half of which are re-recordings that do little more than bring some of the tunes off the first three records 'up to code', and I'll tell you, they didn't sound that bad in the first place, at least not to the degree that I'd ever imagine the band wanting to redo them in less than 30-40 years' time. It's not that the new editions of "Saturday Satan", "Resurrection by Erection" and "Kiss of the Cobra King" are bad...as I've said numerous times, Powerwolf is highly professional, but nonetheless, this one feels unnecessary. Maybe that professionalism is a double-edged sword...a great collection would have included a bunch of rarities, things we haven't heard, maybe a couple brand new tunes, but perhaps the band is so consistent they just don't have much left on the cutting room floor to offer. Anyway, if you're a fan of the Germans then you've already got all of this. The cover art is quite good, I like how it uses the various cover wolfs, and it comes with a nice booklet, but the musical content of the core compilation here is nothing to write home about. Not a total ripoff, since they put in a little work doing the new versions, but unneeded by any but their most devout audience.

Where it becomes a more interesting proposition is if you get the 2CD or 3CD earbook or mediabook which includes either one or two live offerings...we've already covered stuff like The Metal Mass - Live, and a lot of this stuff does seem redundant to that and their other, less impressive live albums, but at least there are a few different tracks here, and the sound quality is up to par. Plopping down the cash for all of this at once, rather than just some repressed tunes and re-recordings seems the far superior bargain. That said, this sort of thing really leads to exhaustion with a band, they seem like they're really milking it all dry. I get that they always love offering up these deluxe products, to give the fans something substantial, and you're by no means required to buy it all, but I think it's time they focused in on some killer new Lupus Dei-quality material and less on the assembly line.

Posted by autothrall at 2:20 PM